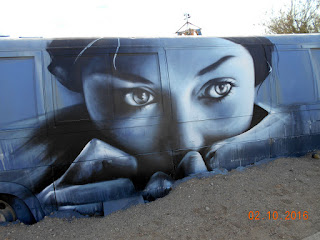 Alright, it’s time to do a post on our Winter in the Southwest. While procrastination has it’s benefits, there comes a point when it’s actually easier to just get the job done. The effort to resist the nagging reminders and the reality that it will have to be done at some point anyway becomes too great to put it off any longer.

But it’s been a nice break from posting.

Overall, our two months in the Southwest was, for the most part, a repeat of the model that was cast during our Winter last year. We spent about half our time at Dar’s Sister’s house, Casa de Cher, and the other half of our time out in the desert in southwest Arizona and southern California. With few exceptions, most of our overnight camps are boondocks on government land.

People ask if we’re concerned about our safety when boondocking. Early in our full-timing life, oh… maybe 8 or 9 years ago, there were some thoughts of concern. We didn’t b-dock a lot back then, but when we did our senses were heightened and our perimeter of concern, our personal “space”, grew quite large. Like maybe a quarter mile or more. We were more watchful than usual and attuned to any sounds that might be out of the ordinary. Like most people, we’re accustomed to being around others and find comfort in numbers… relying on the idea that there are more good folks than nasty ones and the larger number of good ones provide a measure of safety to all. We are social animals after all.

But let’s get real. Let’s think about this for a moment. When is the last time you heard about someone being assaulted while camping on BLM land? I’m sure there are incidents, perhaps fed by alcohol and provoked by unreasonable conflict between people that know each other, but I can’t remember ever hearing about someone being randomly harassed or assaulted by total strangers while b-docking. The reality is that the vast majority of those out on public lands are there for the same reason we are. The short answer is that we don’t think about it any more, preferring to enjoy the peace and solitude of being among the mountains, or next to a stream, or on the desert floor. We may be social animals but we do enjoy… even crave… days of solitude like this.

We do, however, believe that some folks we’ve met have indeed been abducted by aliens and had their minds altered, or in some cases, sucked out altogether. How else can you account for the bizarre beliefs and ideas that seem to emanate from the mouths of some people?

And that get’s me to the larger subject of fear. Almost wherever you turn these days, someone is doing their best to make you fearful of something. Fear sells. Whether it’s that big snowstorm heading your way, the big earthquake that’s due at any minute, your aches and pains, polarized politics, terrorism, product recalls, the quality of our food supply, even much of what’s fed from person to person on facebook and other social media… we’ve learned to be fearful. Fear will make you tune into the newscast. It’ll make you “ask your doctor” about new drugs to alleviate what in reality are normal symptoms of the natural aging process. It’ll get you all ramped-up about those bastards on the other side of your politics. And it’ll make people fearful of being alone in the desert. The best advice I can provide is to live fearlessly. Not foolishly, but fearlessly. The situation is almost never as bad as others tell you it is. 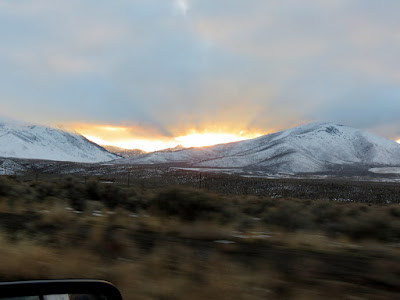 Now that I’ve gotten more than 500 words into this post about our Winter in the Southwest, I suppose I should get to that subject.

Our Winter in residence at Casa de Cher was comfortable and enjoyable… mixing plenty of family “doings” with partaking in the cultural, social, and recreational opportunities of Sun City West.

During our various forays into the desert, we boondocked in more than a dozen spots, each with it’s own unique environment. Hiking and climbing opportunities in every direction. We climbed to interesting looking saddles and peaks… just to do it, and to see what’s on the other side.

While at one boondock in the Saddle Mountain BLM area, early in the morning, Dar became aware of a nearby hot air balloon. The morning stillness was broken by the roar of a big propane burner… a good sign there’s a ballooner in the neighborhood. But this one wasn’t doing a normal fly-by. Oh no. This one was very low, close to the ground, and very close to the mountain, and appeared to be on a collision course. We watched in anticipation of being called on as rescuers. But the balloon quietly and without incident slid behind a fold, a crease in the mountain… like a boat feeling it’s way through a narrow fjord. But a boat can be steered, the balloon, even with the best pilot, is at the whim of the wind.

So this ballooner, somewhere on the risk continuum between gutsy and crazy, slid the bag of hot air through a crack that couldn’t have much wider than the balloon itself. We lost sight of it and prepared ourselves for the inevitable rescue mission. Tense moments turned into minutes. Probability was closer to certainty as the clock turned the future into the past.

But then, maybe 10 or 15 minutes later, it reappeared over a saddle between two shorter peaks of the complex. That must have been some impressive ride. Pictures attached.