Trying to follow the L&C Gang through Big Sky Country takes a little "doing". More so than any other place they explored, they split up and criss-crossed all over the present State of Montana, especially during their return trip in 1806. Our challenge is trying to visit the important sites while keeping fuel expense under control.

Since the route of our exploration when we leave here will take us north to Great Falls and then east along the Missouri River, we needed to do a long day-trip over to Pompey's Pillar, 170 miles east of Bozeman along the Yellowstone River. We made that trip yesterday, Sunday, with my brother Bill as the tour-guide. The weather was cool, low 50's, mostly cloudy with occasional showers.

I never get tired of mountain vistas, especially when accented by low clouds and variable sunshine. The drive to Pompey's Pillar takes us over Bozeman Pass and then along the Yellowstone River as it runs north and east out of Yellowstone Park. The tallest peaks were hidden by clouds but their snow-covered flanks contrasted with the dark greens of the pines and the lighter greens of new grass sprouting from recently saturated hillsides. The scenery is mountain-man eye-candy as far as I'm concerned, and I just can't get enough. 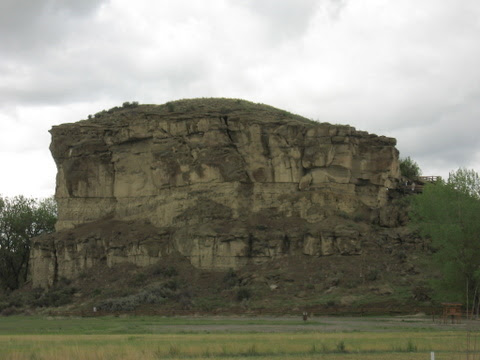 Pompey's Pillar is a 150 ft. high rock formation right along the southern banks of the Yellowstone River about 25 miles east of Billings and less than a mile off Interstate 94. This is the location of the ONLY physical evidence that remains from the L&C Corps of Discovery expedition. On July 25, 1806, as William Clark and a portion of the Gang were moving east along the river, they stopped here. They commonly used high points like this to survey an area and improve the accuracy of the maps Clark was making. About 2/3 of the way up the east side of this sandstone and shale rock "tower", Clark carved his name and date in the soft stone. It's still there and now protected by the National Park Service from weather and vandals. Clark named the formation after Sacagawea's child, John Baptiste, who Clark affectionately nicknamed "Pomp". 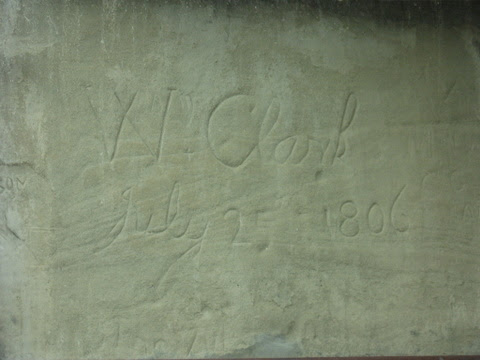 Melting mountain snow and the heavy rains from the last few days have filled every river and stream around here with torrents of rushing water. The Yellowstone River at Pompey's Pillar was full, fast, and the water brownish as it churned up rock, sand, and dirt into a spring storm soup. Normally it takes about two months for water to flow from here to the Mississippi at St. Louis. I'll bet it's getting there a lot faster these days.

Arriving back in Bozeman about 6pm, we had dinner at The Garage, the home of the local soup-nazi. It was a long, but very enjoyable day.