We had a nice day Thursday, yesterday. Since we're getting down to the last few days, we took advantage of the weather and finished up a few projects around the ol' bus-house.

First, we installed the windshield sunscreen that we'd ordered a few weeks ago. When we're parked facing unshaded sun, especially in the summer, that big windshield allows a lot of solar heat energy to come into the bus-house and heat things up. This sunscreen will reduce the heat-gain. It's made of a heavy woven poly fabric that blocks 90% of the incoming sun's rays. Because solar rays don't produce heat until they hit something, it's important for this material to be on the outside of the bus-house -- so the heat says outside. In addition to reducing heat-gain, it helps reduce damage to fabrics, plastic, and leather interior surfaces.

The process of installing the sunscreen isn't easy due to it's size. After borrowing a second ladder from a neighbor so we both had one, Dar and I went to work. The idea is to stretch it out in the approximate position it'll go and hold it in place with big strips of masking tape. Then adjust and adjust and adjust. Once it's where we want it, I've got to drill (yes, drill!!) holes in the exact right spot so the base portion of the snaps can be installed -- screwed into the hole and a small bed of silicone sealant. 7 snaps -- 7 holes, no major mistakes, and I think the job looks pretty good. 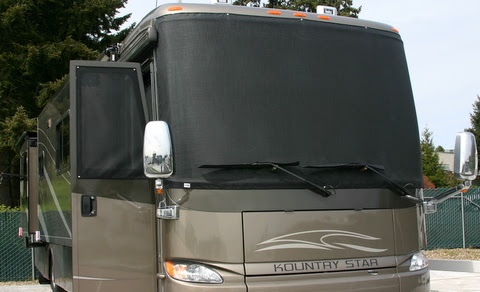 The sunscreen kit includes panels for the drivers side window and the passenger door window as well. Being considerably smaller, they went up quickly. Overall, we're happy with the finished product and are looking forward to a cooler summer.

The second project I completed was the installation of another fresh water filter in the outside water bay. The bus-house came from the factory with a "whole-house" water filter. The filter-element we put in this filter is a good one that removes almost all foreign particles as well as improving taste and smell. The problem is that it only filters water as it's going up to the faucets and fixtures to be used. Water that goes into our fresh-water holding tank isn't filtered until it's used. We wanted to keep the water in the holding tank as clean and odor free as possible too.

So, I ordered and installed a second filter right next to the first, but this one will filter all water coming into the bus-house even if it's going to the fresh-water holding tank. The filter element in this cannister is very much like the one above, but a little less aggressive so as to prolong it's lifespan.

A week ago I also installed an under-sink drinking water filter and separate drinking water faucet on the kitchen sink. This filter has a high quality ceramic cartridge and removes 99.99% of bacteria and other nasty bugs that can be in water from poor sources. The water that comes from this fixture is now filtered three times and should be better than most bottled water. We'd like to stop buying and hauling around bottled water if we can. It's expensive and heavy.

For dinner, we got together with Ron & Sue, and Tom & Rose from our old neighborhood in Vancouver. We had a lot of laughs, a great time. It was fun getting caught up and reconnecting with these good people.

Joke of the Day (from Ron Wiltsey)

These two old guys are talking. First guys says "Next week I'll have been married to the same woman for 60 years!"

Second guy replies "Wow, that's great. What are you doing to celebrate?"

Second guy: "That'll be hard to top. So what are you doing this year?"

First guy: "Bring her back."