The most notable thing to happen to the L&C Gang in this part of the country was the death of one of their most capable sergeants, Charles Floyd. He had become very sick in late July 1804, started feeling a little better, but then died on August 20th. No one can be certain but the best guess is that he died from a ruptured appendix -- a malady that had no cure in those days. If that's what it was he would have died wherever he was. One of the most amazing facts about the Lewis & Clark Expedition is that Floyd's death was the ONLY casualty from beginning to end. They survived disease, extreme temperatures and weather, accidents, encounters with less than friendly Indians, wild animals, and more. While they were very good at living and surviving in the wild, they were also very lucky.

The Corps of Discovery was traveling north and west up the Missouri on their way into the heart of the vast western lands known as Louisiana. During July and August of 1804, they were in this area where the river today forms the border between Nebraska and Iowa. In those days the river was a slow meandering stream that would change course from year to year as spring floods cut new channels and cut through meanders or ox-bows. As I write, we're camped on a small lake -- Brown's Lake -- that was part of the Missouri in 1804, but was subsequently cut-off as the river cut a new channel. There are a number of lakes formed this way near here.

We're at Bigelow Park on Brown's Lake, a small county park about 12 miles south of Sioux City. When we moved in on Thursday, the park was mostly empty. On Friday, it filled up completely -- all 40 campsites. A literal bee-hive of activity, we've enjoyed our neighbors and have spent hours sitting around the picnic table talking and getting to know them. They're good Midwestern folk -- not pretentious at all -- just people that work hard and want to enjoy a couple days at the lake over the weekend. At night, as the sun sets and the wind dies to nothing, the smell of campfires reinforces that we're at a campground, not an RV Park. And that's the way we like it.

During the past two days we visited a number of L&C sites. There's a very good L&C Interpretive Center along the river in Sioux City. There's a monument to Charles Floyd on a bluff about 200 yards from where he was first buried in 1804. Then south of our campsite we visited the Lewis & Clark State Park where there's a new Interpretive Center being built that will house reproductions of the boats of the expedition. Even though the building still is unfinished, two of the boats were tied up at a nearby dock and were available for inspection.

The primary vessel of the Corps was a 55 foot long keelboat, a flat-bottomed boat often referred to as the "barge" by Lewis. Two other boats called "pirogues" were about 40 feet long. They also used various canoes either traded for from Indians or made in "dug-out" fashion from logs. 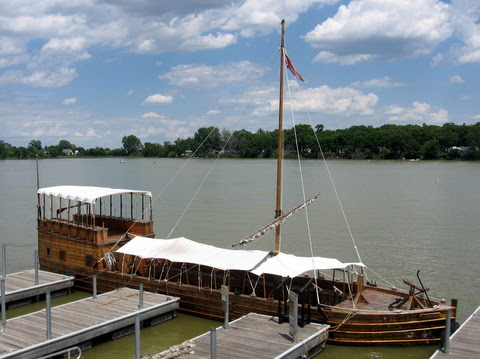 Photo: A replica of the 55 foot long keelboat.

The Missouri River is over 2500 miles long and the Corps of Discovery, as they trekked west, traveled it's entire length... moving against the current. There was no mechanized power, only muscle and, occasionally, wind. The primary means of moving these boats upstream was called "cordelling", pulling a boat upstream by a rope tied to the boat's mast. The L&C Gang had no animals to pull the boats at this stage of their journey so they had to do it themselves. Pulling from the shoreline if possible or by walking in the river if necessary, they'd still make 10 miles or more on most days. These were tough dudes.

Before I close this entry, another comment on Charles Floyd. This old boy may have traveled more after he died than before, as he was buried at least 5 times over the years. In 1804, he was buried by the Gang on top a bluff alongside the river just south of Sioux City. On the Corps return downriver in 1806, they found that wild animals had dug up the grave and scattered the remains. They re-buried what they could. Some 50 years later the river had taken it's toll on the bluff, eating away the mostly sandy soil and exposing the grave again. Citizens collected the remains and buried them about 200 yards east of the original bluff. After another intermediate move what was left of old Floyd was finally buried under a new monument in 1901. Near as I can tell, the original bluff which is long gone was right in the path of I-29.

Tomorrow we're planning a short move to the Omaha area.