Back in the Spring of this year, as we traveled eastward from Oregon and Washington, our exploration theme was to follow the Lewis & Clark Trail. As I wrote yesterday, themes put some organization and objectives to our travels -- they help set a path and highlight obvious places that need to be checked out.

Since leaving Wisconsin in October, we have multiple themes for our travels. Seeing as many State Capitols (as we did Friday) is one. Visiting as many Presidential Libraries and Museums is another.

So yesterday, Saturday, Dar and I trekked back downtown and spent the afternoon at the William Jefferson Clinton Presidential Center and Park. The building is set in a new city park hard on the banks of the Arkansas River, which was previously a run-down warehouse district. Because a theme of Clinton's campaigns and administration was "a bridge to tomorrow", the building was designed to appear like a bridge reaching out toward the Arkansas River. Some locals refer to the building as the "bridge to nowhere".

In the past few years I've become more aware and pay attention to architecture and building design. I'm certainly no expert but I have opinions. (ah, opinions, that great democratizing element of the non-professional. Like Jimmy Durante used to say about jokes, "I've got a million of 'em!") Have you ever noticed how you can often date buildings that were considered "modern" or "revolutionary" at the time they were built? There are some buildings built in the late 60's on the campus of the University of Wisconsin that were considered "cutting edge" and "the look of the future".

Photo of the Humanities Building on the U.W. Madison Campus. 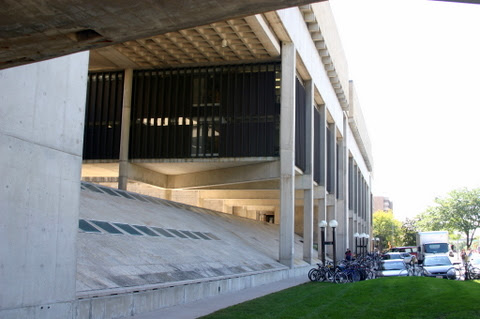 Now, after a few decades, it's clear they have failed the test off time. They look like huge expensive mistakes, they're not very functional, and there's a growing sentiment that these things need to be removed and replaced -- after a mere 40 years -- before future generations start asking "what were these guys were smoking?". They'll be a short-lived monument to an architect who was trying to exceed his/her abilities and had no sense of classical style.

Those glass encased things that tower over and dominate most big city skylines are further examples of this. There is nothing natural or beautiful about them beyond their shear size, scale, and cheap space -- in my humble, uneducated, opinion.

Anyway, back to Bill's Museum. As we drove onto the grounds and I got a good look at the structure, I pondered. (a friend of mine ponders a lot -- claims pondering is a largely lost practice. I've been trying to emulate him and ponder some everyday.) Will this building stand the test of time? In 40 years, or 100 years, will it be considered fresh and functional?... a classic structure that's pleasing to the eye?... that flows, fits in with it's surroundings, and will cause future onlookers to somehow NOT want to stop looking at it? Or will it be as out-of-place, dated, ugly, and abandoned as the old railroad bridge that currently sits adjacent to the property? I don't know. But my opinion is that it'll be dated and look out-of-place in the not-to-distant future.

Photo of the Clinton Museum. 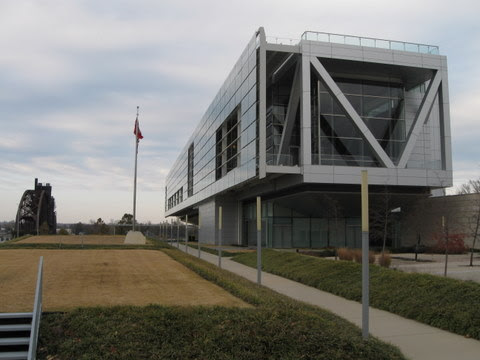 All that building stuff aside, we both love history and spending an afternoon walking down memory lane at another of the 19 Presidential Libraries scattered around the country. These are not libraries in the traditional sense, but more repositories of the papers, records, and paraphernalia of a specific President's terms in office. They're really more museums than libraries.

The exhibits are usually designed in a time-line fashion, so you can walk, peruse, and remember your way through that President's life. Of course there's a lot of emphasis on the time in office -- world events, legislative initiatives, foreign leaders, and results -- all as seen and interpreted by the President himself. It's good to keep in mind as you journey through this history that there are other interpretations of what happened and why. Presidential libraries are one means that a past president can, in some ways, attempt to influence his place in history. They are a past President's after-the-fact campaign for a good perception in the minds of future generations. For example, there was only one small panel that referred to impeachment, and it was under a theme of "Power Struggle with Congress".

Often, these libraries bring in other, unrelated, exhibits to help draw people in. The Clinton Library was full of customized motorcycles, "choppers" as they call them, that are really more works of art than they are functional motorcycles. A few of them look like they'd be nearly impossible to ride, and if not impossible, very uncomfortable. We enjoyed seeing the diversity and imagination of the guys that build these things. They really are works of art.

We enjoyed the afternoon thoroughly.