I’m sure you’ve heard of drag racing. At some point you might have attended a drag race event. You may have even participated in unsanctioned drag races on the lonely back roads of rural America during your youth. Huh?? Com’on… tell the truth.

OK, I’ll come clean. I did. Once. It was during my high school years in the 60’s. In those days there were only a handful of kids who actually owned a car or even had one available for their regular use. Most families had just one car and, if you were lucky, it was made available to you when Dad or Mom didn’t need it — which usually meant only some weekend nights.

At the time in question our family had a 1964 Rambler Classic 660 Station Wagon. It was a good car in the realm of reliable but not very flashy transportation. It had a 6 cylinder motor and, while it was big enough for our small family, it was considered a small car in it’s day. I can only imagine the anguish my parents felt every time I left the driveway with the family’s only means of transportation. If this car had been disabled or damaged by my actions I’m sure my life would have turned out much differently — I’d probably still be working at the canning factory and making payments to my Dad. 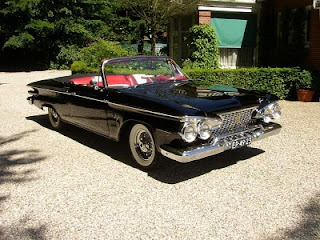 I had a friend named Willard, whose Dad had a 1961 Plymouth 4 Door Sedan. It was a big car with enough room for a little league baseball team in the back seat and, I believe my memory is correct here, it could seat about 5 people across the big bench seat in the front too. Boy, that was some car. It had a V8 motor and something called push-button drive — want to put the transmission into “Drive”?… just push the “D” button… go into reverse?… just push the “R” button… Park?, well you get the idea. This feature was seen as an example of Chrysler Corporation’s finest engineering abilities. Willard claimed the car also had some special effect on girls but the reality was that almost any car driven by a halfway normal teenage boy was a chick magnet in those days.

Well, anyway, one time Willard and I, having too much idle time on our hands, decided to see what would happen if we drag raced these two family roadsters. We drove out to a deserted stretch of county road a few miles out of town with a few friends, lined the cars up next to each other, and made ready. Another friend, Gary, served as the official starter. A large old oak tree was the designated finish line, about a quarter mile up the road.

Willard was proud of the Plymouth and was convinced the race would be a simple dust-up. After all, he had a V8 motor and was heavily favored to win. I may have only had a “6″, but the Rambler was small and light whereas the Plymouth was heavy as a tank. Willard being Willard liked to make a show of things and liked revving the Plymouth’s motor in Neutral (the N button) in an attempt, I’m sure, to impress himself and the others that tagged along. I thought it would be tough to actually win but I was determined to make a race of it.

Gary dropped a T-shirt to signal a clean start. I put my foot to the floor, the little 6 cylinder motor purred to life, and the Rambler crawled to a start. At the same time, Willard put his foot to the floor and the Plymouth’s V8 motor revved up and literally screamed… it was still in Neutral (the “N” button). Yikes! Seeing the little Rambler starting to pull away and fearing failure Willard quickly tried to jab the “D” button (Drive) but somehow pushed both the “D” button (Drive) and the “R” button (Reverse) at the same time… while the motor was still screaming at about 5,000RPM. As I leisurely sauntered down the road in the Rambler all I heard was a loud bang and some fingernails-on-the-chalkboard squealing and then an even louder thud. Willard wasn’t going anywhere. Smoke billowed out from somewhere underneath the Plymouth and it was obvious something was badly wrong.

It turned out the drive shaft and part of the transmission were laying on the road — apparently unable to take the stress of being asked to go both directions with the motor screaming at maximum RPM. A while later I learned that Chrysler Corporation completely abandoned the push-button drive idea. After we graduated Willard and I more or less went our separate ways. I often wondered how long it took him to pay off the debt to his Dad. But I’ll always remember the night of triumph for the Rambler Classic 660 Station Wagon.

I told you all that to tell you this.

A week ago or so we caught wind of a racing event that was going to be held just up the road from Sandollar RV Park at a quaint little bar called the Pickled Pelican. We’re talking Belt Sander Drag Races kids… and not some unsanctioned late night back road races. No Sir! These are official Belt Sander Races sanctioned by none other than the Belt Sander Racing Association of America. This is a group of semi-normal people who take regular everyday belt sanders, run them down a track and race them against other belt sanders owned by other like-minded people.

Here’s how it works: First you’ll need a track. The track consists of two lanes and is made out of wood. Each lane is a “U” shaped — 11-1/4 inches wide with 4″ high “guard-rails” on both sides that keep the belt sanders in their lane. The track is 75 feet long. On the finish-line end of the track are large foam stop blocks that help stop the speeding belt sanders. A good track is elevated at about belly-level to minimize the amount of bending over the belt sander owners need to do — and some can’t do. The track has provisions for providing power to each racer for the full 75 feet by means of an extension cord that neatly follows along behind during each run. It’s also fitted with electronic starting switches and a timing device which has been successful in reducing fist fights between the owners. It should go without saying that these tracks are almost always outside. 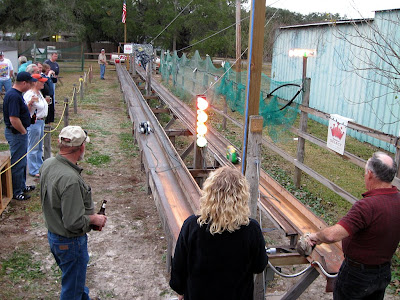 The belt sanders are regular belt sanders, the most common being the cheap $50 model you can buy at Harbor Freight. There are two classes… stock and modified. Stock means stock — you can’t change anything. Modified means you change gearing, components, and just about anything else as long as what you end with remains a 120volt powered belt sander. Everyone must run standard production sanding belts. And some owners go to great lengths to decorate or re-paint their belt sander to make it stand out from the pack. It’s amazing what the mind will come up with when under the influence.

Unfortunately, the day we went the races were delayed and then finally called off due to rain. At 3:00pm, the precise scheduled start for the event, a shower hit the area. Although a number of belt sander owners were still willing to stand in rain puddles and accept the shocking consequences of 20amps of 120volt power through ungrounded cords, the bar owner wouldn’t take the risk. We hung around for a while and eventually it dried up enough so a couple guys ran their belt sanders just to show a few like us what it’s like. That’s when I got the pictures.

But we won’t be daunted in our efforts to see a full sanctioned event. The Pickled Pelican has races twice each month. So on the 7th of February we’ll be back there for another try.
T