About a week ago, over breakfast, Dar informed me that she was going to recycle some brick wall sections from a building that was taken down, demolished, here at Sandollar Resort. What she had in mind was to replace the green fake-grass runner that we had put between the car and the front door of the bus-house to help keep shoes clean — it reduces the amount of dirt and sand we drag into the camper. She was thinking she’d take these broken sections of wall — where a number of bricks are still stuck together in odd shapes but small enough to handle — and dig them down into the sandy soil forming a brick sidewalk of sorts. Listening intently, it was clear to me she had way too time on her hands and has been away for too long from the gardening and landscaping she loved so much when we had a house. 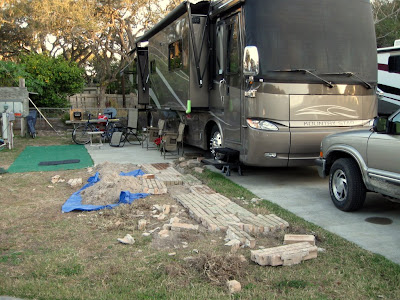 So, for the next two days she dug, and dragged, and dug some more. She got some help from a couple of neighbors who were also looking for things to do — bored to tears with the pace of life in South Texas. She chipped old mortar and split individual bricks to fit gaps in the garden mosaic masterpiece. She back-filled and watered and painstakingly urged grains of sand into the gaps and crevices of old wall sections that had been resurrected… saved from certain doom as rip-rap along the shore or dragged off to a new Walmart store building site as so much “fill”. Nay, these bricks will live on as a stately walkway on site 194 here at Sandollar Resort… and Dar will have left her mark for others to enjoy… and their campers will be cleaner because of it all. And once the grass we planted grows back, it’ll look even better. 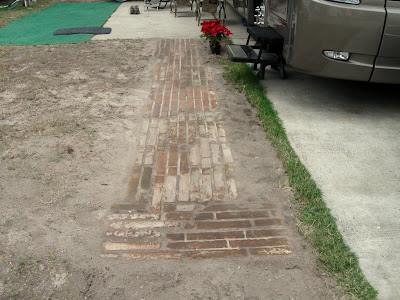