A Great Day for a Swamp Tour

One of the things on Dar’s “to-do” list while we’re in Louisiana Cajun Country is to do a swamp tour. She’s been saying this for the last month or two — ever since we made the decision to come this way. So today Dar is a happy girl — she got the swamp tour she’s been looking forward to.

While we didn’t have to get up quite as early this morning as yesterday, it was still necessary for us to be on the road before 9am in order to be at the landing by 10am.

Our tour guide this morning was Bryan Champagne, a French speaking Cajun who grew up on the banks of Bayou Tesch right here in Breaux Bridge. He’s been an outdoorsman and Bayou stalker since he was old enough to walk.

The boat is a 24 foot Crawfish all-aluminum skiff with a 5 foot wide flat bottom which makes it very stable and safe for the dozen or so passengers he can carry. He both designed and built the boat to run in very shallow water and through dense mats of floating vegetation. The motor is a 40hp Mercury which has been modified by Bryan with various guards and reinforcements to protect it from submerged logs, stumps, and other swamp debris like submerged aligators and giant swamp snakes. He says his boat will go places no other boat can go. All right, then. Let’s get started. 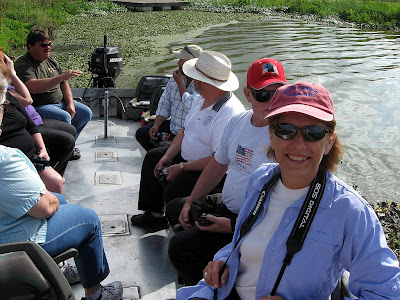 Ten other explorers joined Dar and me on this adventure. Once everyone was seated Bryan fired up the Mercury and backed us down an earthen embankment on which the boat was parked. As we headed into the swamp of Tupelo Gum and Bald Cypress Trees he explained the difference between a bayou and a swamp. A bayou must have flowing water while a swamp is stagnent. Bayous are perpetually full of water. Swamps naturally dry out from time to time. The dry spells are necessary for new trees to root and take hold. Both the Gum and Cypress trees have evolved to survive in standing water for long periods of time.

It wasn’t long before we found our first ‘gator… a small 3 footer, probably a couple years old. During cool mornings they like to find a log to perch on and soak up some sun — heat. As the day grows warmer and during the hot summer they’re much harder to find because they’re laying submerged in the water with only their snout and eyes out. Before the tour was over we’d seen dozens of ‘gators… some as big as 12 or 14 feet long. A couple of them didn’t like how close we were getting and scrambled off their log in a flury of scratching claws, flailing tails, and a whirlpool of churning, spraying swamp water. There was great concern among some of the passengers on the boat but eventually I got over it. 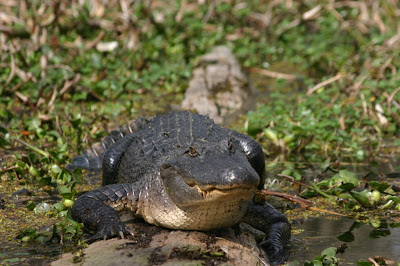 I took some video footage of Bryan running the boat through the swamp. There were many times I thought a jeep would be the preferred vehicle for water only a few inches deep with logs and large branches on the path, instead of a boat loaded with a dozen people. I’d see a big floating log in our way but we just hit it, push it underwater with the weight of the boat, hear it clunk on the lower unit of the outboard motor (which Bryan referred to as an underwater chain saw), and watch it surface again behind us. Often his intended path wasn’t clear to me by looking ahead and invariably we’d go a way I never thought would be passable. You’ll get some idea of what it all was like from this video…


I was surprised to find the swamp didn’t stink or smell at all and was actually kind of fresh-smelling. And there aren’t many snakes in these swamps due to the predatory nature of birds and alligators.

For me the best part of the tour was the Great Egret nesting area. It’s a protected area but one we could get right up next to. The trees were full of hundreds of nesting pairs of Great Egrets, the large snow-white bird that feeds in shallow waters during warm weather all over the USA. Like most of us they really don’t like being disturbed during mating season. It was the first time I’ve witnessed the full mating plumage of a female Great Egret at nest. Dar got some great photos. 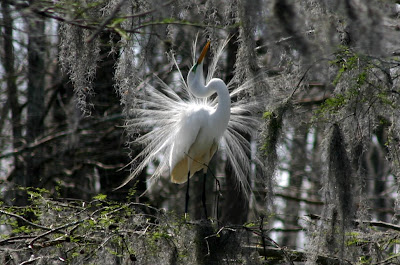 Bryan did a great job showing us his corner of the USA. An incredible range of wildlife including ‘gators, 240 species of birds, deer, turtles, frogs, and other reptiles and insects all make a home here. It may look like stagnant lifeless water to the untrained eye but there’s far more life here than most people realize.