Alone in the Okefenokee 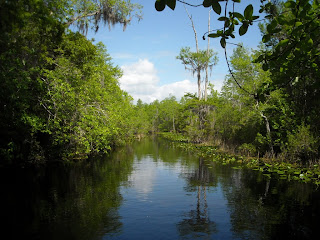 Yesterday, Monday, we joined a few other hearty souls on a two hour swamp tour with one of the Rangers here at the State Park. The State of Georgia leases the park grounds, known as Jones Island, from the National Wildlife Refuge which controls and manages the bulk of the Okefenokee. There are only 4 public entrances into the Swamp, the State Park here being one, and the only one on the west side. Since the only good reason to come here has to do with the Swamp, and the only way to really see the Swamp is from a boat, it made a lot of sense to find a boat. This boat, a pontoon boat, conveniently came with a knowledgeable guide who could help us understand what we were seeing and who would have a good chance of getting us back to the dock again.

The west side of the Okefenokee is the more heavily wooded portion. Out in the wet parts of the swamp, Bald Cypress, Pond Cypress, and Black Gum prevail. In the not-so-wet parts and on the islands, Longleaf Pine, Slash Pine, Live Oak, and Sweet Gum seem to do well. Between the islands the Swamp consists of large areas of impenetrable bogs and other areas where the water is deeper forming small lakes that allow travel by boat. There are a series of canoe trails that traverse the Swamp as well, some of which are natural and others that are minimally maintained for recreation purposes.

Our Swamp Tour took us through a lake, a wide spot really, in the channel that becomes the Suwannee River a bit further down stream. We also took a more narrow boat trail northward and deeper into the wilderness areas of the Swamp. The Ranger pointed out various landmarks along the way that aid in knowing your location and direction of travel. We observed and learned about the key plants and animals... the flora and fauna of the Okefenokee Swamp. Alligators are the top of the Swamp food chain, but observation and education make even them less frightful. The other thing I'll always remember is the sound of the Swamp -- there's a lot going on but it's peaceful. At first it sounds like silence but eventually you start to hear the many voices of nature -- birds, frogs, water, wind. 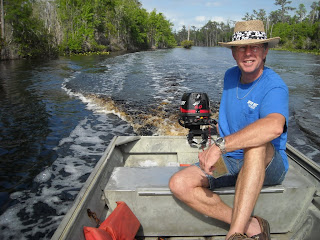 Today, Tuesday, we rented a boat and motor, and continued exploring the Okefenokee Swamp on our own. We debated whether a canoe or a couple kayaks would be a better choice, but we could cover more ground... or, swamp as it were... with the small motorboat. We floated through narrow canoe trails and found the landing for Billy's Island, one of the largest Islands in the Swamp and the site of large logging operations and camps during the early 1900's. There, we found a small cemetery that contained a few graves from that period. We took another canoe trail to the north and found a wooden deck landing built as a rest stop for weary canoers. I lost track of the number of alligators we found along the way. And I'd shut down the motor and just float along at times, taking in the sights and sounds and feelings as one.

When not boating we found a walking trail at the State Park, much of it a boardwalk that extends some distance into dense Swamp. Here, at your leisure, you can walk, observe, photograph, and just soak it all in from another perspective.

Back at tour camp the only animal that gave us any trouble at all was the mosquito. If our visit was any later than it was, say mid-May or so, a deerfly-like bug called a yellow fly that would have joined the mosquito in trying to make exploring miserable. As it was, the mosquitoes were really only troublesome in the evening and it was mostly Dar they were after.

I'll come back again. On the basis of our first visit, I grew to like this really like this place. Spring and Fall are the best times to visit. There's more to do, much more to learn, as we've only scratched the surface of the Okefenokee Swamp.