Flat on a Rock near Flat Rock

We woke to good weather this morning, especially appreciated considering the rainy forecast. So, after a bit of waking up, we made the decision to do our exploring earlier in the day today than originally planned -- while the weather might still be nice. Writing blog posts will just have to wait for rainy weather days I guess. For breakfast we shared the big and incredibly good muffin we bought at Earth Fare in Asheville yesterday on the way home from the Biltmore Estate. It was the best muffin I've had in a long time -- boy it was good!

The destination today was Dupont State Forest, a little known place that's not even on some maps of the area. It's big, about 10,000 acres. The main attractions are many miles of hiking trails and a number of waterfalls along the Little River. Trails and waterfalls... a hikers paradise. We decided to hike a series of trails that would eventually take us to three of the larger waterfalls.

Our first stop was a covered bridge over the Little River right at the top of the first falls on our agenda. All three of the waterfalls we'll explore today are below this bridge. The bridge appeared to be in great condition and was a surprise find. 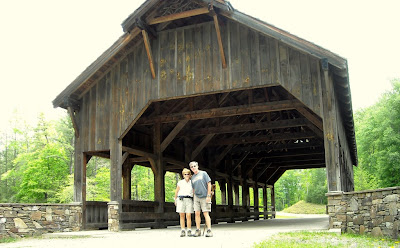 Then down, alongside the river we followed the trail to the base of High Falls. Recent spring rains have loaded the river with water which makes the falls more dramatic than other, dryer, periods of the year. There's a short trail spur that leads to an area of large flat rocks at the base of the falls, perfect for photos and having a quick snack -- it's important for explorers to keep their energy level up.

Because river level is higher than normal water is seeping out of the hillsides around the falls, and flowing back to the river over some of the same rocks we're needing to use to get to where I wanted to rest and take a few pics. Dar's following right behind me. Rocks that are consistently wet start to become slimy and very slippery. As I gingerly worked my way over this one big wet rock, counting on my hiking boots to maintain traction, my feet went out from under me faster than you can say "saw this one coming"!

There I was, flat on a rock near Flat Rock, laying atop the rock in a shallow pool of flowing slippery slimy water, taking inventory of what I might have landed on or let go of. Let's see... head doesn't hurt, camera was in this side pocket and probably ok, ditto the cell phone in the other side pocket. I had the GPS clipped to my belt in back... all I can do is hope for the best. No other aches or pains. Now let's see if I can get back up without doing it again -- as would be pretty normal for my inadvertently-slapstick-prone self.

Standing again, I found a dry spot on the rock, took a quick second inventory of my bones, and scuffed the slime off my boots. Hmmm. And I also hear Dar inquiring about my well-being. Well, seems like everything's ok. So I tried a new route, a little dryer and less slippery, out to the rest spot. OK. But I know, deep down, Dar was laughing. 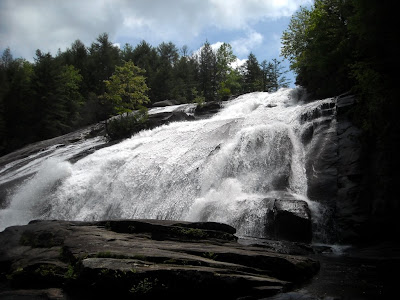 The rest of the day was sort-of ordinary after that. We continued down to the next falls, Triple Falls, which is really a series of three falls in quick succession. The area at the bottom of this one was larger and much easier to get to.

And the last falls of the day, the next one down after Triple Falls was Hooker Falls. After another pause for refreshments at the base of Hooker it was back up the hill to the car. We took a different trail back for new scenery.

Oh, the GPS survived -- takes a licking and keeps on ticking, as the old Timex ads used to say. We probably only walked about 5 miles but the grade changes made it feel like more.

We headed back to downtown Hendersonville to find an early dinner. Although it was only about 4pm we found Mezzaluna -- a very nice "Brick Oven & Tap House" -- open for business. With 50 different beers on tap, how could we fail? We chose a table outside, ordered a pizza and a beer, and, while listening to a thunderstorm in the mountains just to the west of us, talked about our day of adventure.

It was a good day.