Today, Friday, we spent the day exploring the Grand Canyon Village area on the South Rim. We started at Mather Point on the east side and finished at Hermit's Rest on the extreme west side... a total of some 8 or 10 miles. There's a walking trail right along the rim from one end to the other. We walked segments of our trek, drove a small portion of it, and used the Park's free bus shuttle system for part of it too. We probably walked 4 or 5 miles during the day... not that much really... but a portion of it was somewhat steep and it felt like more than it was.

First off, let me say how fantastic the Grand Canyon is. From the South Rim it's easy to see the North Rim, and with binoculars, the North Rim Lodge some 10 or 11 miles away. Here on the South Rim we're at about 7,000 feet of elevation above sea level, the North Rim is about 1,000 feet higher. Between the two rims is the most incredible and massive canyon cut by the flowing water of the Colorado River over many millions of years. The Canyon runs for more than 250 miles through Northern Arizona -- between the Glen Canyon Dam and Lake Mead, the lake created by Hoover Dam near Las Vegas. It's simply massive... on a scale that humans just have a problem dealing with. 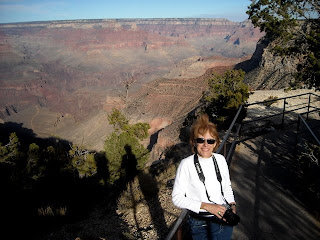 As one looks out on the view, the Colorado River, the culprit in creating this Grand Canyon, isn't very visible in the twisted and tortured canyons below. First, because it's flowing more than 4,500 feet below the viewers vantage point it's usually hidden by parts of the canyon itself.  Second, because it's 4,500 feet below, if one does see the river it's so dang far down it looks like a minor creek to a small-town boy from Wisconsin.  4,500 feet sounds like a lot, but to put it in different terms: you could build three Sears Towers starting at the river level, one on top of another, and the three of them would still be slightly below the top of the canyon where we were standing. It's hard to get your arms around that kind of scale. Come to think of it... why was I standing so darn close to the edge today? 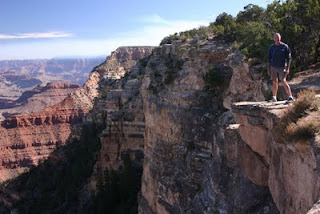 As noon approached, we had a snack picnic lunch out on an unprotected ledge over the rim and soaked in the view for quiet moments without saying a word... just looking and thinking and wondering. 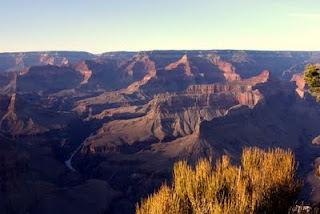 As we walked westward along the rim we soon came to the lodge area, the real heart of the village. There stands a series of lodges built over the years to cater to the needs of ever larger throngs of people coming through the park. The grand-daddy of the lodges is the El Tovar Hotel, a wonderful old log and stone structure that's as elegant today as it probably was when it was built over 100 years ago. Not wanting to pass up an opportunity, we had "phase 2" of lunch in the lounge of the El Tovar... something we'll remember for a long time. 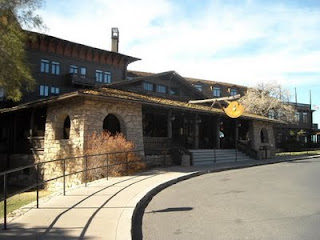 Another lodge of note is the Bright Angel Lodge, a more casual lodge built from local logs and stones in 1935. We stopped in for a quick look around and were impressed with the comfortable "lodgey" atmosphere of the place. It looked and felt like it should be here in this grand place.

However, a couple of "lodges" were tucked between the grand El Tovar and the Bright Angel Lodge that screamed early 60's Holiday Inn. I'm sure someone thought they were great at the time, but they sure stand out now as really out-of-place. We also explored the historic 100 year old Sante Fe Railroad Station just below the hill of the El Tovar Hotel. And there was a train at the station... the Grand Canyon Railroad tourist train that one can take between here and Williams, AZ., about 45 miles to the south.

Then we continued the trek westward toward Hermit's Rest, still some 7 miles distant. We walked part of the way but, not wanting those shuttle bus drivers to think we were shunning them, eventually gave in to comfort and our sore legs, and took the bus the rest of the way.

It was a full day of exploring one of the most spectacular places on earth. Tomorrow there will be more.