This morning we left our boondocking spot near the south entrance to Petrified Forest National Park and headed toward New Mexico. Our path was US-180 to Springerville, AZ. where we picked up US-60 toward the state line. We settled tonight near the town of Magdalena, NM, high on the Plains of San Augustin about 40 miles west of Socorro, NM. This area is a large elevated plain -- 7,000 ft. above sea level -- and is surrounded by mountains on all sides. Tonight we're camping at our highest elevation ever, 7120 ft. We have power tonight, a real treat after boondocking the past couple.

The reason I wanted to stay up here is that the VLA, the Very Large Array Radio Telescope, is here. 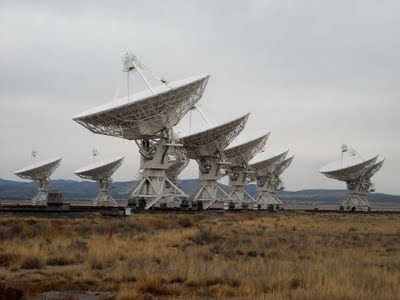 This is an installation of 27 individual parabolic receivers that are hundreds of tons in weight and can be moved into different configurations depending on the demands of the projects their assigned to. During our visit, the antennas were tightly configured near the center of the triple axis arrangement of the facility. They are moved by a specially designed double-tracked railroad carrier that picks each antenna off it's concrete base and moves it to a new base maybe miles away. At it widest, most spread-out configuration, the furthest antennas are more than 20 miles from each other.

By arranging many small (relatively speaking) antennas in this way, and linking them electronically, they literally become a single antenna from the standpoint of the distant and faint radio signals they listen to from the cosmos. Radio telescopes are another tool in the arsenal of gear that astronomers use to understand the universe.

We were able to walk through the self-guided tour at the visitor center, and then explore the grounds within certain limits. The entire facility is undergoing an upgrade. It's been here for 30 years and technology has advanced far beyond what was available during the 1970's. In January it will completely shut down for a couple months in order to complete the upgrades. When it starts searching the skies again, who knows what we'll learn about the origins of the universe and our understanding of the cosmos?

Here's another one of those coincidences that seem to occur when you least suspect it: just down the road from the VLA, and I'm talking within sight of the visitors center, is the Torstenson Family Wildlife Center. The guy behind this place was Bob Torstenson, the third generation owner of Duo-Fast Corporation -- the company I spent 25 years with. Bob was a real outdoorsman. He loved to hunt and be in the woods as much as possible. After he sold the company to ITW in 1999, he purchased this large tract of land in New Mexico in order to pursue his interest. Tragically, he became ill and died in 2002 at the age of only 51. He left all 95,000 acres that he owned in New Mexico to the Rocky Mountain Elk Foundation, along with a $4 million endowment for it's perpetual care. Click on this link to learn more. He was quite a guy! 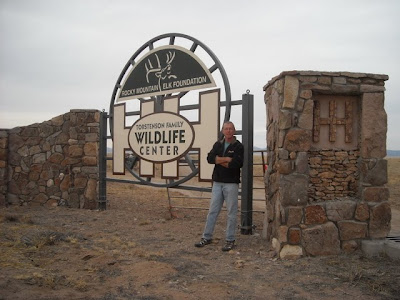 So that was our day on Thursday. Tomorrow we're moving again, being chased by Old Man Winter once again. We'd like to make it to a camp near Carlsbad, NM., a good 250 miles away and almost 4,000 feet lower in elevation.