We're back from our hike... no twisted ankles, broken bones, or pulled muscles. My GPS reported we walked 8 miles today including our walk from camp to the trail head, but GPS's only report the horizontal distance traveled, not the vertical distance. The vertical distance, or elevation change, today was about 1,400 feet -- first down, then back up -- and almost all that change was in just 3 miles of the total 8 we walked today.

The trail we hiked was the Bright Angel Trail, the most heavily used trail in the Park. It can take you from the South Rim all the way down to the river... 4,500 feet down and 3 miles to the north. You can cross the river on a suspension bridge and then hike another mile or so to Phantom Ranch, a touch of civilization at the bottom of the Grand Canyon where a hiker can stay overnight in a small lodge or cabin. We didn't get anywhere close to Phantom Ranch during our hike today. 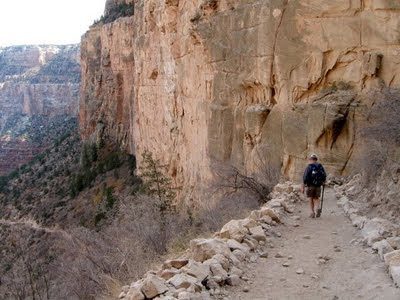 The Bright Angel Trail is a shared use trail, with both people and mules having access to it. Mules are used to haul both passengers and supplies between the rim and the river. It's been done for many years and the mules are an institution around here. While hiking on the trail there's a protocol the must be followed in order to avoid spooking the beasts and potentially throwing a rider off and down the canyon... basically, stand aside, shut up, and don't do anything that'll scare the mules. We passed a number of mule trains on the way down and up today. 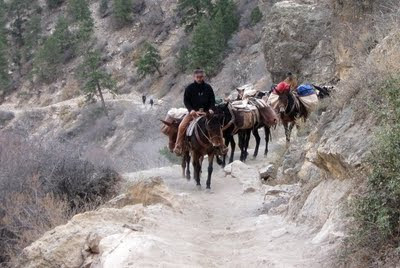 Our little hike took us only about a third of the way down into the canyon. It took us a little over an hour to go down 1,500 feet and a mile and a half of walking. We spent almost an hour at that point (picnic lunch, talking with people, etc.). The trip back up took about two hours. The rule of thumb is that the "up" trip is twice as long as the "down" trip.

During our hike we ran into all kinds of people. Some actually run down and then run back up. These cannot be normal people. But they do it and they time their result only to return the following week to do it all over again in an effort to better their previously best time. There must be some kind of defect that causing this aberrant behavior. At what point can they call what they've done a success?  How will they know? At what point will they decide they've had enough and quit?

Then there's the other extreme... people walking down the trail with flip-flops, or pointy toed purple pumps (which I actuallly saw today), or people obviously too large and out-of-shape to go very far. The first part, the going down part, is easy compared to the return trip.  I wonder how many people require assistance at the end of the day to get back to the top?

My thoughts from our brief descent into the canyon today are these: 1) that's one heck of a hole 2) it's just as hard to fathom the scale of the Grand Canyon from down in it as it is from up top, and 3) I can't wait to get back and go further, all the way to the river, maybe all the way to the North Rim. 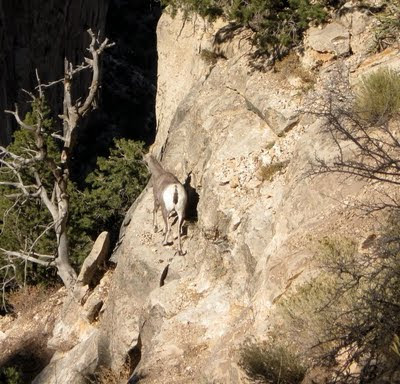 As we neared the top we saw 6 Desert Bighorn Sheep clamoring around and feeding on who-knows-what as they were working the side of a near vertical canyon wall. They're top-notch natural entertainment. It doesn't seem possible for any four legged beast to be that sure-footed, that adept at standing on the tiniest slivers of rock ledges... and make it look like it's easy... no big deal. I've been told that seeing these Bighorns is a rare treat. Well, we certainly enjoyed it.

After our successful return we somehow managed to crawl into the Bright Angel Lodge's Bar, and with my last burst of energy, order a couple beers. That was some of the best tasting beer I've had in a long time. We eventually made it back to the bus-house where we watched the best sunset sky-show we've seen in a long time.  It'll be an early night tonight so we can get rested up for the move tomorrow.