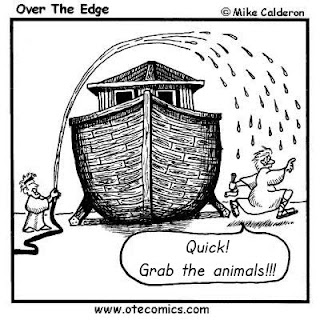 We have a little more wet weather to put up with the next few days. Long-time Winter Texans (as we're called down here) tell me that weather patterns like this happen every few years. It's noticeably colder and wetter than most years... the "normal" years. People that are knowledgeable about these things, experts, tell us that this is an "El Niño" year.

Just what is El Niño? The following is from Wikipedia:

El Niño-Southern Oscillation (ENSO) is a quasi periodic climate pattern that occurs across the tropical Pacific with a roughly 5 year cycle. It is composed of an oceanic component, called El Niño (or La Niña), which is characterized by warming or cooling of surface waters in the tropical eastern Pacific Ocean, and an atmospheric component, the Southern Oscillation, which is characterized by changes in surface pressure in the tropical western Pacific. The two components are coupled: when the warm oceanic phase (known as El Niño) is in effect, surface pressures in the western Pacific are high, and when the cold phase is in effect (La Niña), surface pressures in the western Pacific are low. The oscillation does not have a specific period but occurs every four to twelve years, with the most common periods being around 5 years. Mechanisms that cause the oscillation remain under study.

In popular usage, El Niño-Southern Oscillation is often called just "El Niño". El Niño is Spanish for "the boy" and refers to the Christ child, because periodic warming in the Pacific near South America is usually noticed around Christmas. The more abundant fish stocks that accompany this phenomenon was seen by local fishermen as a "gift" from the Christ child. "La Niña" is Spanish for "the girl."

In North America, El Niño creates warmer-than-average winters in the upper Midwest states and the Northwest, thus reduced snowfall than average during winter. Meanwhile, central and southern California, northwest Mexico and the southwestern U.S. become significantly wetter while the northern Gulf of Mexico states and Southeast states (including Tidewater and northeast Mexico) are wetter and cooler than average during the El Niño phase of the oscillation. Summer is wetter in the intermountain regions of the U.S. The Pacific Northwest states, on the other hand, tend to experience dry, mild but foggy winters and warm, sunny and early springs.

Hmmm. I hope that clears it up.

Have a great weekend. I'll have the next Journal update bright and early Monday morning.

Trying to figure all this out...
Thom
Texas