on March 26, 2010
We gave the sun a couple hours to warm things up before heading up to the Palo Duro State Park visitors center at the top of the Canyon on Thursday. The building in which it's housed was built by the CCC in 1934. It's a one-story stone structure built from local materials and wedged into the side of the canyon wall just a short way from the front entrance to the Park. Spectacular views of the Canyon from this viewpoint are even more colorful when illuminated by the low morning sun.

Inside, there's a video of the history of the Canyon and the surrounding land known as the Llano Estacado, a large elevated arid plain that makes up most of the Panhandles of Texas, Oklahoma, as well as parts of New Mexico. A series of interesting displays describe the processes that created the Canyon and the various geologic layers exposed on its walls. Also notable is that the last skirmish with the plains Indians took place in the Canyon in 1874.

Palo Duro is Spanish for "hard wood", in reference to various species of mesquite, juniper, and other hard wood species that grow naturally in this canyon environment.

After the Visitor Center it was back into the Canyon and to a trail-head a couple miles from our camp. There we geared up and headed down the Lighthouse Trail, a 6 mile round trip to the most famous rock formation in the Canyon, Lighthouse Peak. The Peak isn't visible from any road inside the Canyon -- you've got to hike to it to see it. 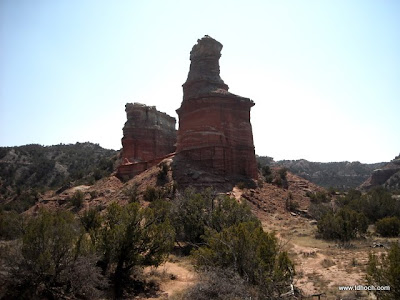 It's a pleasant hike through the Canyon and around a series of peaks and ridges. By getting back into remote areas it's possible to see the full range of colorful layers of different rock and sediment that the Palo Duro Creek cut through to form the Canyon. About half way to our destination, Lighthouse Peak came into view. As we neared the base of the peak the climb became steeper. Recent wet weather made some steep portions of the climb slippery and tricky. 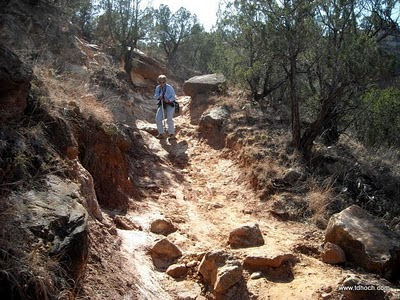 Lighthouse Peak is really two spires that are separated by a flat area of harder rock. That flat area provides a nice place to soak in the views of the Canyon all around you. We lingered to absorb it all. Of course, many dozens of pictures where shot -- most of which you thankfully won't have to slog through. The ones that survived will be posted in our online albums. 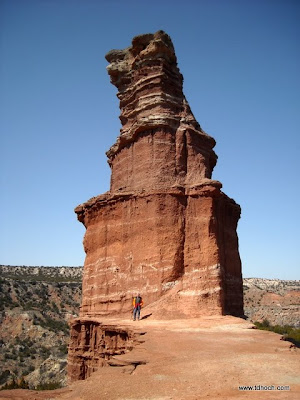 If you look closely in the above photo, you'll see an explorer posing on that flat area between the two peaks.  As always, you can click on any photo here to see a larger size.

The hike took four hours. Not having done much hiking in the past few months, both of us had rebelling muscles. That bed I mentioned yesterday was beckoning and I'm sure we'll sleep great tonight.