on March 19, 2010
Yesterday, Thursday, we came up so dry in our search for two different things, that we had to stop at Hondo's on Main in Fredericksburg to wet our whistle before it was possible to continue on home. What in the world could I be talking about?

First, we had a plan to see the famous Enchanted Rock. And not just to see it... but to climb it, all the way to the top... to lay on it... listen to it "sing"... feel the temperature change... become one with it. If you remember, we drove up to experience it last Saturday only to be confronted with a long line of traffic waiting to gain entry to the small park. Since we don't do lines well, we quickly decided to "bag it" for the day, and try again during a weekday. Well, yesterday was to be that weekday. Furthermore, we figured most people are going to rush to be there in the morning and we'll likely be able to drive right in, park, and hustle our way right up the side of the rock if  we hold off our arrival until mid afternoon.

But, as I write this, after a long day, we have yet to experience the enchantment of Enchanted Rock. After nearly an hour of driving, as we rounded a bend and topped a hill, there it was... a line of traffic backed up well over a half mile and stopped dead right in the main lane of travel. It was a longer line than on Saturday! Have these people nothing better to do on a Thursday afternoon than to sit in a stopped-dead line of traffic, 15 miles out in the country, as they wait, with wonder and starry-glazed eyes, that they'll hopefully, magically, be chosen for a parking spot and then for their chance to walk up the side of the 425 foot high chunk of granite? Huh?? 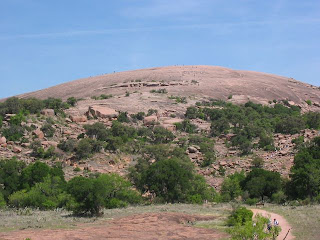 But we were prepared for this possibility, already having made our decision earlier in the day: if there was any line at all, we were aborting the exploration and would find something else to do. This area is just nuts during Spring Break. We'll be back in the Hill Country next year again and will explore Enchanted Rock during a weekday that ISN'T Spring Break. So we did a fast U-turn and high-tailed it back to Fredericksburg.

[The photo is Enchanted Rock from a distance. I wonder what it looks like up close. Maybe next year??!!]


The second thing we didn't  find today is the Bluebonnet wildflower. During the past week, we've had people ask if we had seen the Bluebonnets yet? They reported sightings north of our camp and others east of our camp. We've been north, and we've been east, but apparently hadn't been looking in the right place or the right direction... I don't know. All I know is that we hadn't seen any yet. Someone else reported that every year the road just outside the park is lined with Bluebonnets... that families make annual pilgrimages to take photos of their dogs, their children, their cutting horse, their pickup truck, or anything else they can think of, sitting among the Bluebonnets in the ditch alongside the highway (and you thought climbing a granite rock was entertainment for the whole family!).

We'd chalked up our lack of Bluebonnet sightings to inexperience, to not being observant enough, to lack of luck, or to not giving enough money to the Republican Party of Texas. But Thursday was going to change that. We were going to have our eyes glued to the ditches alongside the roads, to river and creek banks, to private garden areas, and have our color receptors tuned to "blue". Not one Bluebonnet could escape -- we were ready.

The drive to Enchanted Rock took us mostly west and then a little north. I drove slower than usual in order to be extra-observant. We even made a side trip right past the LBJ Ranch, where Lady Bird Johnson made seeding the wildflowers and especially the Bluebonnet a statewide tradition every year. The Bluebonnet was her favorite wildflower and she wanted them planted alongside every roadway in Texas. You'd think she'd have planted some right there at the Ranch, alongside the roads leading to the Ranch. After reading about her passion for this project, I expected to see fields full of Bluebonnets encircling the Ranch. 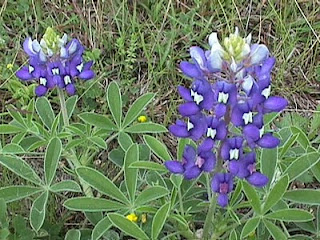 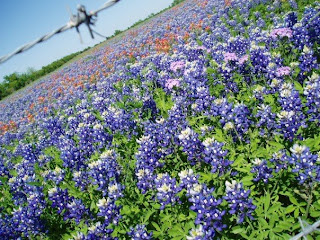 If you ever do see them, this is what they're supposed to look like. I'm told they are an amazing sight that you'll never forget.

(photos courtesy of Wikipedia -- they're NOT ours)


But it looks like we'll have to wait and see them another year. I can't explain the other sightings that have been reported to us this year... unless it's a practical joke on us Yankees. Hmmm. It sure kinda feels that way.

After a light snack and a unique brew at Hondo's On Main in Fredericksburg, we made it back to the bus-house -- disappointed by the lack of discovery but ecstatic at being together while exploring the mysteries of Texas on a great day. Dar has a few photos from our day in an online album if you're interested.