I see I have some "catching-up" to do. We've been sooo relaxed the past few days, working on projects and writing in the Journal have suffered in lieu of building campfires and watching the 'ol Miss flow past our campsite.

After visiting with our Cedar Falls friends on Monday evening, and after a very good nights sleep, we finally had everything ready for another day of travel by 10am on Tuesday. The drive was an easy one... about 130 miles, mostly eastward, to Dubuque, across the US-151 bridge over the Mississippi River, and just a little further to the town of Dickeyville. From there the bus-house took us northward on WI-35/US-61 to the twin communities of Tennyson and Potosi, and down a rustic road to the Grant River Corps of Engineers Campground situated hard along the banks of the big river.

We camped here during the Fall of 2008 [link to Journal article] and thoroughly enjoyed it. Grant River COE has about 60 campsites for RV's and a few additional for tenters. The only negative about the place I can come up with is that it's situated smack between the river and a pair of busy mainline railroad tracks. However we've found that we're rarely awakened during the night because the bus-house does a good job of keeping outside sounds outside.

Since we were here last they've spent some considerable money on the Campground... new asphalt roads, many more concrete parking pads, tree trimming, new grass, and a general neatening up (not that it needed it!). So many other Federal facilities we've stayed at recently have clearly been neglected and apparently on the short end of the budget stick. I'm not sure why this one is different, but it's good to see.

Yesterday, while exploring the area, the car started making a terrible grinding noise. Further examination (Dar running alongside the slow-moving car trying to figure out if she could isolate the noise to a specific wheel or area) determined that whatever it was was coming from the front right wheel. (What were the neighbors thinking?) The best way to describe the noise was a grinding sound -- a loud, finger-nails-on-a chalkboard, grinding sound. A couple years ago we had a similar thing happen with the Chevy Blazer. In that case I just ignored the sound, turned the radio up a bit, and it eventually went away. I figured it was a small rock caught in the brake someplace and, I surmise, it (the rock) wore completely away. It was easy to ignore the sound on the old Blazer... less so with the new Focus.

While working on a plan of action (nearest Ford garage?... can we make it?... call tow-truck?...) I saw a small gas station that also installed tires. Imagine that, a real service station -- just like the good old days. I drove in and in less than two minutes the owner was listening to our problem -- both my verbal description and the obvious grinding sound from the wheel. And in less than another five minutes, he had the wheel off. There, on the ground under the removed wheel, was the culprit... a small rock or stone that had apparently lodged itself into a recess between the brake caliper and the spinning wheel. The way it was stuck it just remained in the recess and ground against the wheel as it spun. There was a small grove worn in the wheel and a matching shiny flat spot on the rock. As with the Blazer, it would have eventually ground completely away and the problem would have righted itself. I guess the moral to the story is that simply ignoring the problem can work.

Oh, by the way, the service station guy... he refused to charge us anything. Even after repeated pleading, he would not take anything for his time and effort. Now that doesn't happen often, does it?

Every night we've been here along the Mississippi there's been a campfire at the TDHoch campsite. We love watching the fire as well as the stars above. Often, just after sunset, we'll see satellites in orbit -- little dots of light that move silently and steadily across the sky. Last night, Wednesday night, about 9:20pm I spotted a very bright light moving upward just over the horizon to the Southwest. Thinking it was really a plane with it's landing lights on (it was very bright), and thinking I could put one over on Dar, I pointed it out to her as I announced the first satellite sighting of the night. She didn't believe it, thinking (like me), that it was a plane too. But planes don't fly with landing lights on unless close to an airport and this thing wasn't turning, wasn't landing, wasn't dimming, wasn't making any noise, and wasn't showing any other navigation lights that all planes have. 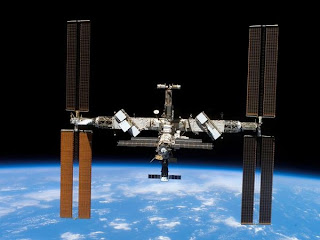 We both watched it closely as it climbed almost directly overhead, and we both became increasingly convinced this wasn't a plane... it was indeed something in orbit. It acted like a satellite... but the brightest I ever remember seeing. After some online investigating this morning I was able to confirm that we saw the ISS... the International Space Station... which, after all the recent "room additions" is now much larger than it was the last time we saw it soar overhead. It was a real treat for sky-gazers like us. And, by the way, it's making a few more bright passes the next few evenings. If clouds don't get in the way we'll be out watching.

If you'd like to get a schedule of all the space junk flying overhead (your tax dollars at work) so you can waste campfire time by staring up once in a while, check out this site www.heavens-above.com . Once you punch in your location it'll produce a list of stuff you can amuse yourself with... as the world turns.