Good to Have Wheels 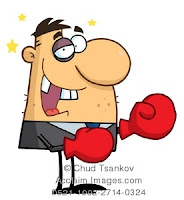 Slamming car doors... loud laughter and talking... two drunken fools verbally and physically sparing with each other... a crying child... a woman's voice trying to quiet things down... broken glass... and more... cursing... and yelling... and one loud side of a few phone calls. It was midnight and this is what awakened me from my deep sleep. Alert... warning... "sound the alarm"... DefCon 5!... red alert... WAKE UP... prepare for battle.

Our first night after setting up camp at this un-named RV campground near Glacier provided a few tense moments for our intrepid explorers. The "perps" were a young couple, (he was celebrating his 20th birthday -- just a baby), their 2 yr. old child (do the math... babies having babies!), and a couple relatives (brother? brother-in-law? and spouse? girlfriend?) who were there to apparently help this 20 yr. old celebrate this monumental occasion. They, the couple and their kid, were living in a very small RV trailer amid piles of accumulated trash and debris just a short distance from our campsite -- supposedly there helping out the campground owner cut and split 10 cords of wood for the wood shed --  at least that was the story. The rest of the campground looked nice, normal, and as you'd expect. In retrospect, we were initially uncomfortable with the messy situation, but, due to the busy holiday weekend (campsites near Glacier are hard to find), decided it probably wouldn't become an issue and wouldn't have to deal with anything anyway.

Here I was, after midnight, listening to this ruckus. How do I deal with this? In almost 3 and a half years of living fulltime and camping in hundreds of places, this is the first time we were confronted by anything like this. In their drunken condition (and showing signs of being mean drunks, displaying that young male competitive bravado -- each trying to outdo the other in feats of daring-do, at least in their addled minds.

I reckoned any attempt to ask them to quiet down would probably fail and the situation might well deteriorate from there. What other options do I have?  I could call the campground office and prompt a confrontation with the owner. I could call 911 and get the cops involved. Hmmm. The options were many. But I wasn't liking the possible outcomes from these options... especially the last few.

Neither I nor Dar, who's also awake at this point, are feeling personally threatened. It's just a bunch of drunks making noise. So let's wait it out and see how the situation progresses. We had options to exercise if things deteriorated... things to do if it got worse. As we listened to the slurred speech and the nonsense spewing from the mouths of these "kids" having their little party in the middle of the night, we'd already determined that this would not only be our first night at this campground... but our last as well. We'll find a new camp tomorrow... after a little discussion with the owner.

And that's exactly what we did. Eventually the situation eased... probably as participants passed out. I fell back asleep by 2am... Dar by 3am. This morning we both headed to the office, had our discussion, and received a reasonable refund for our trouble. By 11am, despite the busy weekend, we had another place lined up... a very nice RV Park in Columbia Falls... just a dozen miles down the road.

Concern for personal safety keeps some people from pursuing this nomadic lifestyle. But after three and a half years on the road we can honestly say that this is the first situation where we've been uncomfortable. The key point is that when you do feel uncomfortable, get yourself out of the situation as quickly as you can. Listen to your instincts. Don't do things that will make matters worse. Maintain a comrfort-zone around you at all times.

And you'll sleep soundly... even in a Walmart parking lot.
T
Life in 300 Square Feet