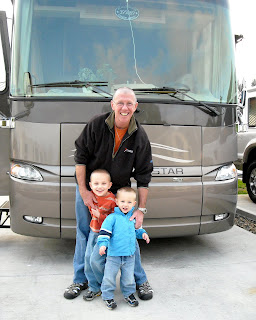 It's getting late and I have a knot in my stomach. Earlier tonight we said our good-byes to Andrea, Gage, Ryan, Evan, and the rest of our Northwest Family. Those month-old roots are hard to pull out... it takes time to adapt to being on the road again.

The plan is to depart Vancouver Friday morning in the predicted 50% chance of rain and head up the Columbia River Gorge to the eastern side of the Cascade Mountains. Because the mountains always wring-out a goodly amount of water from the typical west-to-east moving weather systems that come rolling in off the Pacific Coast, it's often dryer on the eastern flanks of the mountains than on the western side. We'll try to use that phenomenon to our benefit as we float south over the next few weeks.

The objective Friday is to make it as far as LaPine State Park just south of Bend, OR. We'll use that spot to re-group emotionally and see what the weather gods have in store for us. Next week we'll spend some time at another State Park near Crater Lake before dropping into California and Nevada.

I'd like to take this opportunity to extend a big "THANK YOU" to Andrea, Gage, Duane, Shirleen, Ron, Sue, Tom, Rose, and all the many others we met and talked and mingled with during the past month. And to Mark and Shelly... if ya'll hadn't taken off for the islands... and if we'd done a better job managing our time... well, we'll just have to catch up with you two on the next trip. Visiting the Northwest always makes us feel like we've come home... and someday, it might just be that again.