After my last Journal update, on Saturday, Dar and I did drive over to the town of  Bouse (rhymes with "house"). Located about 15 miles from our Q desert camp, this town of about 600 people has been around for about a hundred years. It originally supported a railroad, was the center of mining activity in the nearby hills, and, during WWII, there was an army base a few miles down the road. But over the years poor old Bouse never found a sustained purpose to support it's existence. Thus, it looks and feels like a candidate for yet another future Arizona ghost town.

The targets of our quest were a museum that Dar heard was in town, and secondarily, some early Indian art carved into the desert floor somewhere in the area. We found the museum, in the old "asay office", and had an enjoyable conversation with a gent that was manning the place. The artifacts and old photos in the collection centered around the the town's mining and military connections, and we had an enjoyable time going through them... learning what they could tell us about those struggling pioneers. This small museum's existence supports our belief that almost every small town... really, any past clustering of people... has a story to tell if you just take the time to seek it out.

Armed with a few more clues about the Indian art from our museum visit -- as well as yet another nearby historic artifact known as the Quartzsite Rock Alignmnet -- we headed back into the desert on the hunt.

The Indian art is known as the Bouse Fisherman Intaglio. It's the figure of a person holding a spear and standing over a stream that contains a couple fish. "Intaglio" is a process of creating an image on a flat surface -- in this case by removing the darker surface material thus exposing the much lighter materials below. They are also called "geoglyphs" by some. There are hundreds of these intaglios around the Southwest, if you know where to look, produced by early native people anywhere from 500 to 2000 years ago [link to another set over in Blythe, CA]. Some are huge... a couple hundred feet or more, but the Bouse Fisherman is smaller, perhaps 80 feet from top to bottom. The surface material color difference that creates the figure is subtle... and easily missed unless you're looking for it. Most of them were first noticed from low-flying aircraft in the 1930's.

As you might imagine, the work of preserving these intaglios from damage can be difficult in this age of ATVs and go-anywhere Jeeps. In our hunt for The Fisherman, it became apparent that the State of Arizona, or whoever has the charge of preserving these things, is employing stealth as a tool. Even the guy back at the museum had not been to this one. Based on sketchy information, we thought it was close to one of a few pull-offs between milepost 7 and 8 on Plomosa Road. But there are no signs or any other indication of it's precise location. We found it by guessing, walking a trail over a hill a couple hundred yards, and stumbling on a fenced-in area and brick marker. Even then we weren't quite there. Small signs on the fence indicated his was a protected area and no vehiclular traffic was permitted. To gain entry to the fenced area it was necessary to straddle barbed wire strung across a (previously open??) personal access gate. But barbed wire doesn't usually stop truly intrepid explorers... so straddle it we did, albeit very carefully.

Another hundred yards or so beyond the gate we found it... The Bouse Fisherman. If you're interested in finding it too, I can get you to the trailhead at the highway pull-off (N33.78796  W114.09328), but after that you're on your own.


Just a mile or so down the road from The Fisherman Intaglio is the Quartzsite Rock Alignment, which is an alignment of desert stones forming letters on the desert floor, about 15 or 20 feet in scale, that spell out "QUARTZSITE", followed by an arrow and the number "11", which is the mileage to the town of the same name. There's also another arrow that points due North. The story goes that this was done for pilots being trained during WWII, although I'm a bit of a skeptic on this, as it's easy to actually see Q in this clear desert air (just look... it's right over there...) and just 11 miles away. Could it have been done by the Q chamber of commerce hoping to lure tourists to the area? We may never really know. 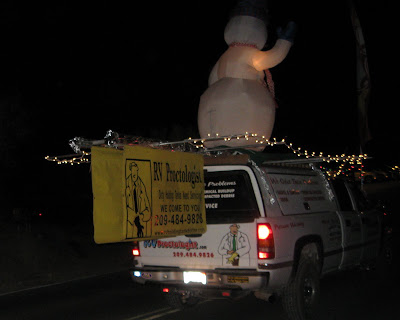 Then, Saturday night, we drove into Q to see the Big 8th Annual Christmas Light Parade. Arriving a few minutes before step-off at 7pm, we parked among hundreds of hulking pickup trucks lining the parade route, each loaded with a couple wintering northerners eager to see the parade without having to go to the trouble of moving from their warm and comfy truck-seat. The parade consisted of groups of lit-up pickups, trailers, ATVs, 4 wheelers, and a hot rod or two... some nicely done... separated by a series of long breaks. We agreed that it was a nice 15 minute parade squeezed into a half hour.

So Saturday was a big day for small explorations.