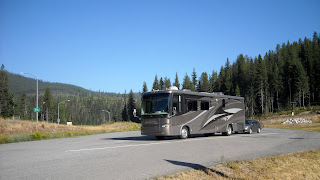 The day after Labor Day, Tuesday the 6th, we broke camp at Square Dance Center near Lolo, MT., and pointed the bus-house nose on a westerly and uphill course following US-12 toward the Idaho border. This is precisely the path taken by Lewis and Clark back in 1805, and a route we'd taken a few years ago -- albeit in the opposite direction. It's one of our favorite scenic drives so it's no wonder neither of us spent much time considering alternate routes over the mountains. This is the one we'll do now, again, and, hopefully, many more times in the future. 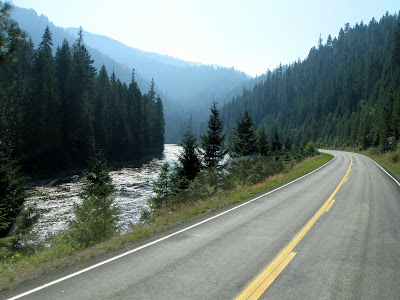 The skies were clear but visibility was hampered by smoke from a number of fires in the surrounding hills. Persistent high pressure and low winds prevent the yuck from moving much so the day wasn't a good one for photos. Dar managed but the results certainly weren't great. 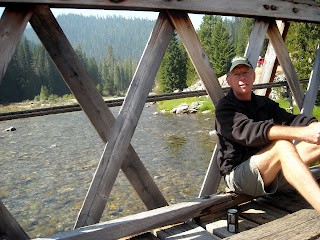 I don't want to duplicate what I wrote after our previous trip through here (May 2008) so I'll just say we, once again, thoroughly enjoyed the day, stopping often at pull-outs and rest areas... even pulling out the chairs once for a longer break. I mean... we were clearly in no rush to be anywhere. Linear exploring at it's best. 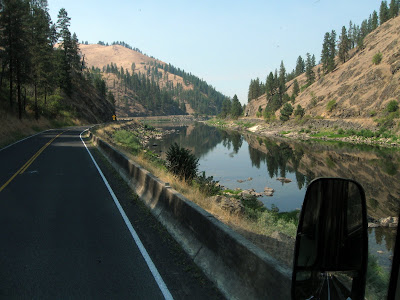 We eventually made it to Orofino where we set up camp for a couple nights at Clearwater Crossing RV Park. Just luv "rushing" across the countryside like this! 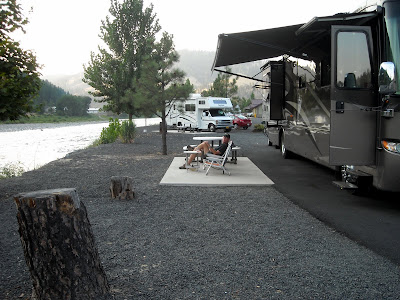 Since my words are in short supply today, I'll pop in an extra photo or two. And more photos from our day can be seen in our online photo collection.
Idaho Montana Must See