October 21, 2011
First, the weather. Got down to 31 degrees early this morning and we were huddled under piles of blankets as even inside the bus-house we saw low 50's. I won the toss and got up to throw a log in the furnace, get coffee started, and start the genny. Still expecting mostly clear weather, lots of sun, and seasonably warm temps for the next few days.

Our house batteries are really in bad shape -- almost 5 years old and abused by us newbies before we knew what we were doing.. If we can make it to Rockport I'll replace them myself. IF not, or if I run into a great deal somewhere, we'll have it done along the way. Probably Rockport though.

After things warmed up a bit we started moving and getting ready for today's adventure... the hike to, and climb of, Cinder Cone. This is a volcanic feature that erupted in the middle 1600s spraying the area with an immense quantity of ash and cinders from deep in the earths mantle, and pushing out square miles of a thick viscous lave from it's base that oozed into a lake, hardened, and is mostly unchanged today.

In order to get there, we had to leave the park on the Northwest side, travel east through Old Station, hook a right on Hwy 44, and find Butte Lake Road which we take to the south and back into the northeast corner of the Park again... a distance of about 30 miles. It took a little doin' to find the road (are Butte Lake Campground and the Cinder Cone hike on the same road??? GPS Maggie Mae was not clear.) but once on the right road it's a 6 mile run on rough gravel to the Butte Lake area.

Side note: we passed through National Forest land on the way back into the park and passed a NFS campground (Butte Creek Campground) that looks good for future use... once we get a smaller exploratory rig.

Another side note: on our way out of the campground this morning, we got behind someone in a popup truck camper. I raced to get closer and thought it was a Four Wheel Camper... one of those I've been interested in.  They turned into the Loomis Museum and we drove on... but Dar said, let's go back and talk with them.  It didn't take more than a couple seconds and we did a 180, entered the parking lot just as they were getting out of their truck. I pulled closer and said... Would you mind if we asked you a few questions about your camper. Well, probably 20 minutes later we had a peek inside, and had learned more than what I was looking for, and some new friends. It's not a FWC, but an All Terrain Camper, built in Sacramento by people who used to work for FWC.  Very similar. The reason he went with the ATC is he's tall, maybe 6'5", and wanted to sleep lengthwise (north-south) instead of crosswise (east-west). FWC had nothing capable of doing that so he went to ATC and found what he wanted.  My estimate is that it's a 6.5 foot model on a mid-bed Toyota Tundra. It's basic but these two are doing exactly what I'm thinking would enhance our sabbatical experience in the future. They are Steve and Kathy from Bozeman MT. Since we're familiar with Bozeman (brother Bill works there) we had lots to talk about. They're originally from Stevens Point Wisconsin... look academic but we never got into discussing that. They are retired and still maintain a home in Bozeman. Not only did we enjoy meeting and talking with them in the parking lot, but we also ran into them on top of Cinder Cone later in the day. 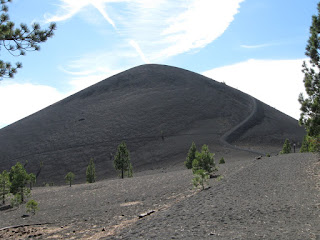 Back to Butte Lake:  Butte Lake has a campground (small campers and tents only please), a boat launch (no motors, small lake), day use picnic areas, and hiking trailheads. Our objective was to hike the Cinder Cone Trail... about a 3 mile round trip, but an elevation gain of about 900 feet. The trail is mostly through Pondy forest along the shore of Butte Lake and the Fantastic Lava Beds (that's their name... really). In the 1600s, a vent opened in the earth blowing ash and cinders high into the sky and extruding a thick viscous lava from the base of what's Cinder Cone today. That extruded lava cooled and became the lava beds... an amazing thing in their own right... appearing like huge piles of black glassy rock debris that was dumped there in huge piles recently by some mining operation. But it isn't... it's the frozen in place lava flow, appearing much like it did 300 years ago.

The walk was made more difficult by a thick layer of ash and cinders... much like walking in dry sand at the beach. The gentle upward grade as we moved through the forest toward Cinder Cone itself was manageable but slower than our normal pace. But then, we came to a clearing and Cinder Cone appeared... a several hundred foot high, steep sided, conical pile of small crushed cinders. The NPS created a path up the side of the cone, two persons wide and angling sharply upward at a just-barely-manageable slope for anyone but the most physically fit hardbody out there. It took us almost an hour just to climb the side of Cinder Cone. It was very slow going (but slow and steady wins the race) with many stops for water and rest. Leg muscles were rebelling and threatening to cramp up... but in the end we made it.

Once up, we spent another hour at the top. There's a double rim... the higher outer rim is probably the older. The lower innner rim, perhaps the result of a secondary eruption??? Below the inner rim is an inverted cone crater that's quite deep (hard to estimate distances and measurements in this environment... at least for me)... a couple hundred feet???.  There was a trail completely encircling the rim at the top, another around the lower rim, and there was a steep trail leading down to the bottom of the central crater. We did everything but the crater... which was steep and we didn't know how much longer to trust our legs. As noted earlier, we ran into Steve and Kathy from Bozeman on top... the only other hikers we saw up there (we did run into one other guy going up as we were going down... but that was it.)

The views from the top are spectacular. Right over there is Mt. Lassen dominating the backdrop. But all around are volcanic features that include all four types of volcanoes found on earth. We snapped a bunch of photos... dozens... maybe hundreds. But the photos really don't convey the feeling and grandeur of the place and the accomplishment of the hike. We felt light and exhilarated on the way down and back to the car. Energized. Pumped. A great day.

Note: we're camped at 5900 feet. The top of Cinder Cone is 6900.  Once back at camp tonight, we both nixed the campfire, opting instead for a quick dinner and working on journals and photos the rest of the night. 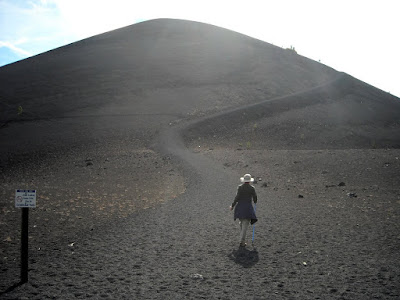 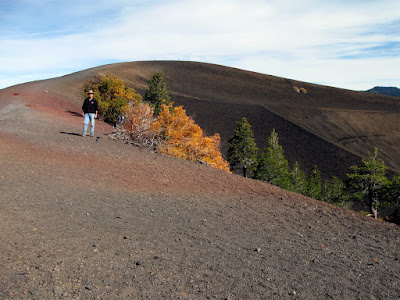 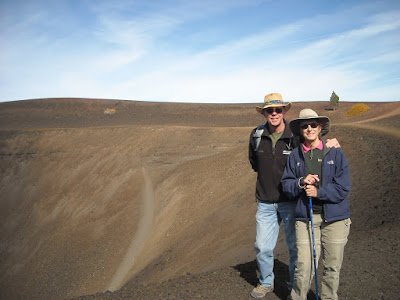 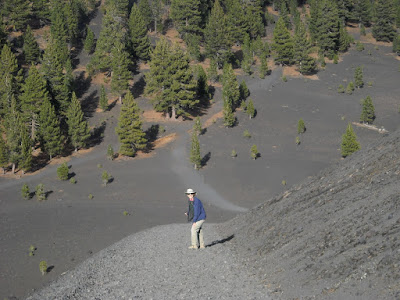