I have a problem with hard boiled eggs (the ones that come from chickens, not the dear old folks who need Fox News to help them make sense of the world these days). Or would it be more accurate to say the eggs have a problem with me? Perhaps. But either way, this problem is really two problems. The first, correctly cooking the hard boiled egg.  The second, peeling the shell from the hard boiled egg. And, to make this even more complicated... I wouldn't be surprised if the cooking problem is related to the peeling problem.

There are about as many formulas for cooking the perfect hard boiled egg as there are cooks. (Just look, they're scattered all over the internet... Google's 69th most popular search!!) I've tried many but just never quite found the one that works consistently for me. Sometimes the egg is overcooked and it's hard and rubbery. And often, if overcooked, there's this strange green-ish layer of some unknown substance around the yoke which recent research has indicated, that while unsightly and disgusting, is safe to eat.  I think I've been mostly overcooking my eggs in the past.

But I have good news on the cooking front. I've found a system for boiling eggs to perfection.

The biggest change from what I was doing in the past is placing the eggs in already boiling water, and continuing the boiling action going during the entire cooking time. It makes sense that "time at cooking temperature" is more precisely controlled with this method.

I once heard that hard-boiled eggs are a "negative food"... that is, your body burns more calories in peeling and digesting the egg than there are contained in the egg. I highly doubt that's true for most people but considering the extreme problem I have in peeling the hard boiled egg, it may well be the case for me. Nay, I dare say, for me, it's far more than a problem... it's an absolute inability... probably stemming from some congenital defect in my thumbs. Dar has proven it to me time and time again.

With the same batch of cooked eggs we both start peeling at the same moment. I shatter the shell... a few small shards yield, a glimmer of hope, I might get lucky with this one... but no, the process devolves into 10 minutes of increasingly smaller shell fragments being pried off with increasing difficulty and larger attached pieces of egg white. Heart pounding, sweating profusely, hands shaking with frustration, microscopic shell fragments scattered all over the counter, the wall, the floor, my result is a mottled scarred mis-shapen blob that more resembles a cratered moon of Uranus (or an AMC Pacer) than the glistening sleek smooth orb that Dar liberated from just two (two!!) shell halves 10 minutes earlier. She's a egg peeling superstar.

Feb. 2, 2012 addendum:  It's been suggested that older (aged) eggs probably will peel easier. Also, with the cooking process I defined above, it's best to get the eggs out of the refrigerator early, and let them warm closer to room temperature before cooking.  This will reduce the number of eggs that crack while cooking from thermal shock. I'm still all ears if you have other suggestions.

June 19, 2012 addendum:  Here's an idea that does work. My daughter Andi found it. Instead of boiling water at all, just bake the eggs in an oven. Use a muffin pan to keep them separated and under your control. Warm the eggs to near room temperature, place in pre-heated 350 degree oven for 30 minutes. Cool quickly in cold water when done. Adjust time for oven variation and size of eggs.  It worked great. 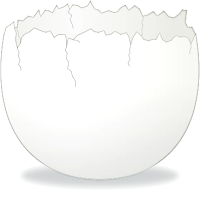