We're approaching the half-way point in our stay at Rockport this winter and my case of "hitch-itch" has degraded to a full blown rash (roamin' rash??). No amount of salve or medication is going to remedy this problem until we can start moving again about April 1st... and that's no joke.

Dar's been putting in her time at the hospital, but not as much as last year. In her first four weeks last year she put in something like 195 hours -- not bad for a part-timer, eh? This year, same period, she's logged about 120 hours -- a more reasonable number, and one closer to what she was looking for. 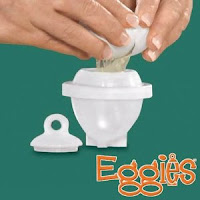 Friends Doug and Kay (from Minnesota and currently in Rockport), after reading my post a couple weeks ago about hard boiled eggs, fixed me up with some "Eggies", six of them to be precise. These "as seen on TV" devices eliminate the need for peeling as the egg is cooked in the plastic Eggie after it's removed from the shell. The concept was interesting to me because peeling the egg is my big problem.

I gave them a go a few days ago and found they do work as claimed. However, each Eggie has four pieces (4!!) which fit and thread together to form an egg capsule... 24 pieces of plastic that must be organized and stored, kept track of, pre-oiled and assembled (and at least one of them, try as I might, just wouldn't screw together as it should), and then washed -- a lot to ask of someone who's trying to simplify his life. I'll give 'em another try before rendering a final verdict, however.

Recently I added the "Recent Popular Posts" widget to the right-side panel of this journal. The most often specifically requested posts during the past 30 days are displayed here, most popular at the top. One of the mysteries of blogville (at least to me) is how a dumb little post about hard boiled eggs get's so much attention (as I write this, it's number 2). And I've received far more emails, had more recommendations, suggestions, and comments on this subject than normal. Who could guess something like hard boiled eggs would generate so much interest and activity?

Dar's brother Dennis (check the past few posts for more info) is now out of the hospital and recovering at home. He's making good progress, but his biggest problem now is fighting boredom. With significant medical restrictions for a while (as you'd expect after what he's been through), and his outdoorsy, always busy, nature, he's going crazy. Knowing him as I do, I suspect they may have to restrain him, tie him down, until he's back to something like 100%. If they're not keeping track of him closely, he'll escape and, in a flash, will be outside blowing the latest U.P. snowfall from the driveway. It might be necessary to borrow one of those electronic ankle monitors from the Sheriff for a few weeks.