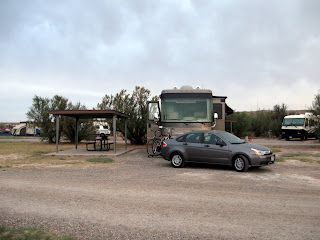 Tonight, we're camped at Bottomless Lakes State Park just east of Roswell, NM. We paid for 4 nights as we'd like to explore the Roswell area after the Easter weekend crowds subside. Once again we enjoyed agreeable driving conditions today and the miles slipped by easily.

It's easy to see what the economic drivers are in this part of Texas: oil, cotton, and a recent addition, wind energy. Huge brown dirt fields are being prepared for this season's cotton crop. Some of the fields were irrigated, others not. The fields are prepared with alternating ridges and troughs... sort of like corduroy, perhaps a full 12 inches of difference between the ridge and the trough. The crop is apparently planted in the trough. I don't know if that planting style keeps the deeper soil from drying out so much, or if it channels the meager rainfall more directly to the plants down in the trough, or if there's another reason... one of these days we'll have to ask.

Scattered amongst the fields are oil wells, and not just the old ones from the much earlier west Texas oil boom. There is plenty of new activity too... drilling rigs and oil field service stuff going on all around. High oil prices must be stimulating investment in squeezing more black gold from these declining oil fields.

And wind turbines... thousands of wind turbines.  In today's brisk breezes they were almost all pumping electrons into the grid. It'd be interesting to know where most of this power goes. But regardless, it's hard to understand how making power with wind can't help the overall energy situation. I'd rather be looking at these graceful white wind turbines than a smoke belching coal fired power plant with dozens of high-tension power lines running out from it in every direction. And the power from these wind generators must run underground to some central point. You don't see any power lines running from them at all. Sure, go ahead... put one of 'em in my backyard.

We were a little unsure of this State Park as we were driving in. It's about 7 miles south of US-380 and about 12 miles east of Roswell. The road in is old asphalt, in poor condition, and very narrow. It certainly wasn't built with big old bus-houses in mind as I'm sure we filled considerably more than just our lane most of the way to the campground. But once in it started to grow on us. There are a couple dozen sites with water and electric, a few with full hookups, and another couple dozen or so drycamping sites. We're camped an easy walk to Lea Lake, the lake with the only swimming beach and a big day use area.

Bottomless Lakes is New Mexico's first State Park, designated as such in 1933. It was set aside to preserve a series of water-filled sink holes, a unique feature of the local geography. The largest of the lakes, Lea Lake, is spring fed to the tune of about 9 million gallons per day.

But we are having an issue with our Verizon cell phone service... like it's non-existent here at the State Park. To cover situations like this we've recently converted our back-up TracFone to one that operates on the AT&T (and affiliates) system. In three of the last four stops (Rockport, Hondo, and now here) the little TracFone has greatly outperformed the Verizon phone by a mile.  It's not just slightly better... we're talkin' a Verizon phone with "no bars" versus a TracFone with 3 bars of signal strength.  We're talkin' not being able to complete a call without dropping it once, twice, three times with Verizon, while the TracFone calls are rock solid. I'm sure it has something to do with our selection of places we've been lately, but Verizon better start gettin' back on the ball or this team of explorers will be looking for another solution.

Oh... one more thought:  do you think Verizon's problems have anything to do with the millions of data hogging "smart phones" they've convinced everyone in North America they need??? Hmmm?

Due to our connection problems, updates to the blog will be made intermittently for the next few days. And I'll add some pictures to these posts when we have a better connection.