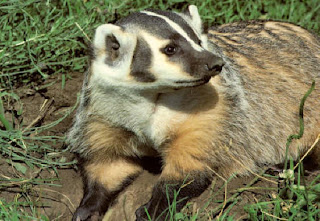 Today we explored most of the rest of the Elkhorn Mountain Scenic Byway... the portion we couldn't complete the other day as the road wasn't yet plowed out from all the winter snow. So today we thought we'd attack the problem from the other end.

Starting in the town of North Powder, we headed west and into the Elkhorns, in the opposite direction we were going the other day. On the way up we stopped a few times to soak in the scenes, smell the cool pine air, and snap a few photos. At the top, not far from the summit, we found the Anthony Lake Ski Area, pretty much abandoned at this point in the season with the exception of a 3 or 4 snowmobilers. Yes, there was still plenty of snow at that elevation (7,100) for a few more weeks of that frosty sport.

Beyond the Ski Area we did, as expected, find the road closed and still covered with patchy drifts of thick snow. As we're unsure of our towing insurance coverage on officially closed roads, we decided to not take the chance and head back.

On the way down we stopped at one other small historic town along the byway, Haines, OR. We explored the small city park where they've preserved a handful of historic log cabins and buildings from the 1800's. With a population of only a couple hundred people, it's clear the town is struggling. But you gotta love any town with the slogan "Biggest Little City in Oregon... with whiskey in the water and gold in the streets." It's going on my short-list of places I may want to live.


Finally, the most notable thing about our day was the first ever (for both of us) sighting of an American Badger in the wild. We were heading back down from the ski area, twisting and curving as the road wound it's way along streams and around hills. All day we had experienced fallen rock in the road from eroding steep sided cuts... and were both watching carefully for boulders in the roadway. As we rounded one curve and faced a long cut, we both saw what, at first, appeared to be a large rock in the road. As we got closer it became evident the "rock" was moving... and the second thought was that it was a blowing piece of debris... like a plastic grocery bag.  Then, as we got to within a few dozen feet it became clear it was an animal... an animal that was low, squat, with a distinctly striped face... one that stopped for an instant, looked directly at us... and we knew exactly what it was... a badger. There was no doubt.

Surprised, it bolted for the side of the road and stopped, just as we closed to within 20 feet. We stopped too. For a brief moment it was a face-to-face stand-off of three badgers... two from Wisconsin and one from Oregon. It then clamored up the side of the cut, into the brush and into it's future. In our future, we'll always have the memory of that unusual meeting.

Since badgers are mostly nocturnal it was a real surprise to see it. And, of course, we were too busy looking and checking it out to get a photo. It's amazing how many thumbs you grow when having to quickly perform with a camera.