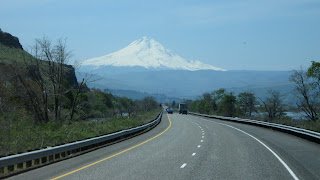 With a long-ish drive in store, we were on the road before 9am.

What a marvelous drive through the Blue Mountains of Eastern Oregon, followed a little later by the "E-ticket" rated drive along the Columbia River and it's Gorge cut through the Cascade Mountains. I never tire of the Gorge... I think of the native people who lived here for thousands of years... the Lewis & Clark Corps of Discovery coming through in the fall of 1805... settlers along the Oregon Trail enduring so much hardship as they sought a better future... all of it watched over by the bright white snow-capped Mount Hood.  It's mind-candy for explorers of any age.

The move today was good. Sunny skies and a tailwind helped push the bus-house to over 8mpg. We arrived at the RV Park (we've been here before), got set up, and headed over to see the grand kids, Andi and Gage, and re-connect.

As much as we love traveling and exploring, we also love time with family. What's that old saying... We love leaving, but we also love coming home.
2012 Texas to Oregon Oregon