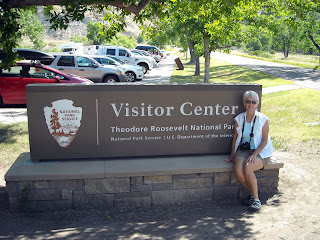 Friday was our first day exploring the south unit of Theodore Roosevelt National Park. First off, we stopped down at the visitor center for orientation -- the requisite film on the Park and a walk through the exhibits. The Park Service also has Roosevelt's first cabin, known as the Maltese Cross cabin, right here on the grounds of the visitor center. It's of log construction, built to Roosevelt's specifications, which make it bit more civilized than most of the other prairie cabins of the day... a very livable three room structure with a loft, wooden floors, and a high peaked roof. A ranger-guided tour got us inside.

Following orientation we meandered through the 36 mile scenic drive around the south unit of the Park... a marvelous confrontation with the North Dakota Badlands. It was a very warm day, intense sun and all, which probably kept the wildlife less active than otherwise. But we did see a bunch of bison, wild (feral) horses, prairie dogs, and a few pronghorns. Both whitetail and mule deer are also here, as are elk... but we didn't see any examples of them. The landscape is a "badlands" type... very similar to the Badlands National Park in South Dakota. Thick layers of ash and silt laid down millions of years ago have been eroded and transformed into the colorful and stark badlands clays, siltstones, sandstones, and reliefs we see today. 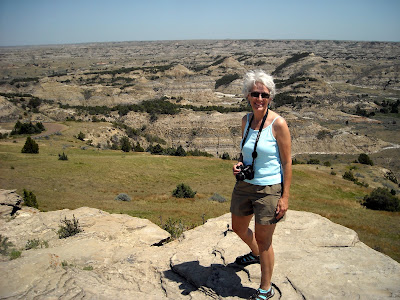 Never a couple that shuns a hike up a hill, we also walked to the top of Buck Hill, the highest point in the Park and took in a panoramic 360 degree view of the area.

In 1883, Teddy Roosevelt came west to hunt. He liked the area, it's rugged landscape and even more rugged characters, so he bought a small cattle operation... the Maltese Cross Ranch.  Later, he bought a second operation... the Elkhorn Ranch, where he had a larger cabin built that, for a few years, was his main home in the West. In the ensuing years he spent most of his time (except for winters) along the Little Missouri River... living the "strenuous life" of a rancher and ranch hand. He may have been the proprietor of the cattle operations, but he took pride in working side by side with the hired hands and cowboys. These were his formative adult years... where he toughened up, grew to appreciate hard work and effort, learned about human nature and nature in general, and developed an appreciation for conservation and the prudent use of our resources. TR said later in his life that he never would have been President if it hadn't been for his time along the Little Missouri in North Dakota.

This Park, if nothing else, is a monument to the President that began the process of setting aside vast areas of public lands as National Parks and for popularizing the notion of conservation and sustainable development.

On Saturday we went into the little town of Medora, which is the gateway town for the Park. It's a historic place, as it was the center of activity during the 1880s. Besides Roosevelt, there was another historic figure who saw opportunity in the cattle business out here... the Marquis deMores, a wealthy French nobleman and the son-in-law of the New York banker Louis Von Hoffman. He came out here in 1883, the same year as Roosevelt, started the town of Medora (named for his wife), and built a large house on the banks of the Little Missouri River.  His idea was to raise and slaughter cattle here and ship the dressed meat to the population centers around the country by means of refrigerated rail cars, a recent development.

However, events conspired against him, and the operation failed completely in 1886.  The severe winter of 1887 drove the final nail in the coffin of the cattle business out here, as about 80 percent of the herd did not survive.  Except for two short visits while passing through the area, the Marquis deMores and his family never returned to Medora. The house remained in the family and a staff was retained for almost 50 years to keep the house maintained and habitable. In the 1930s, the house and grounds were donated to the State Historical Society as a museum.

Medora struggled for many years but has come into it's own as a tourist destination for visitors to the National Park, the Chateau deMores, and the Medora Musical, a musical stage show that's performed nightly during the summer.

Go to our online photo collection to see more photos from our last few days of exploring. 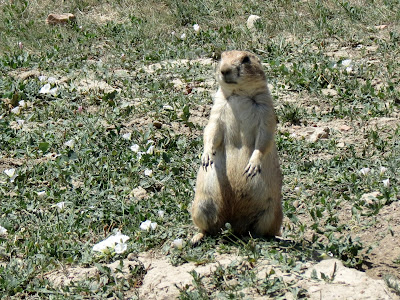