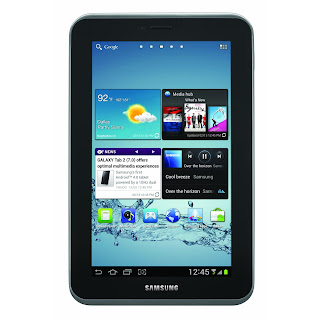 In an effort to stay somewhat close to the run-away technology train... I've recently taken delivery of a small tablet computer (or "device" as some call it). It's a Samsung Galaxy Tab 2 7.0... a little 7 inch tablet running the Android operating system. Unwilling, up to this point, to unwrap my fingers from a $500 bill for a real IPad (remember, I'm the guy who still owns, uses, and loves a "flip-phone"), I jumped at the first full-featured tablet for under $250 that came along. The little Tab is getting reasonably good reviews from the technology press and I reasoned that if I didn't make the move now I might be forever relegated to the ancient laptop (remember the abacus?) for the rest of my life.  And, for now anyway, I'm still resisting the tempting dixie cup of Apple Kool-Aid.

But I should add that in composing this post I'm not using the integral screen keyboard ubiquitous to all tablets out there... I mean, that's one of the things that make a tablet a tablet... no hardware keyboard... just the software imitation. On a small 7 inch tablet, the built-in screen keyboard is pretty darned small. It works fine for a little input here and there, but for a writer with lengthier ambitions and little time to spend poking at a smooth screen with no tactile feedback whatsoever, a real keyboard is, well, the key. So this short post is being punched out on my son-in-law's Logitech wireless (bluetooth) keyboard. And after almost two paragraphs my impression is very positive. The Logitech feels right. There's no substitute for that tactile feedback from the intersection of mechanical key and fingertip. The only thing I'm struggling with now is the tablet itself.

So during the next few months I'll continue to play around with the Tab to see how it fits into our lifestyle. The "instant-on" feature is nice, as is the ultra portability and GPS capability... and I can see it following us out on explorations... almost anywhere we go.
Tech