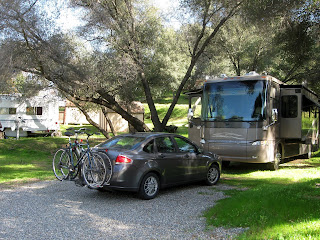 My last post to the journal (this past Sunday night) had us in Bakersfield California, on the southern end of the big Central Valley. Tonight, Thursday, we're in Red Bluff California, at the northern end of that same valley and some 400 miles north of Bakersfield. We're here for a night of rest before tackling some mountain passes tomorrow on our way into Oregon. Weather looks like it'll cooperate for that trip so, with any luck, we'll be just a long stone-throw from the Willamette Valley tomorrow night. And then it's supposed to start raining.

This past Monday we made our planned drive from Bakersfield to the SKP Park Sierra near Coarsegold California. Along our way on that 150 mile drive we stopped at Sportsmobile of California in Fresno to check out what they do and see them in action. One of the vehicles we're considering for our next phase... Sabbatical II... is a Sprinter Van converted into a camper. I'd characterize our visit as productive and educational... as we've certainly got a lot more to consider and talk about. The Sportsmobile representative spent well over an hour with us as we toured the plant, looked over both finished and "in-process" units, and talked about what we were thinking. His focus was on how we would actually use the van versus just pushing flashy "bells and whistles". If we ever get to the point of putting one of them together (for the most-part every one is a custom unit), I sense it'll be easy to work with this group of people. It was a good visit.

About mid-afternoon we arrived at SKP Park Sierra and landed a site smack next to our friends Jimmy and Julianne. The next three days are a blur. Both Monday and Tuesday nights we got together and hung out around a blazing campfire... always good for stimulating conversation and fun. Additionally we used said campfire for a cooking fire Tuesday night... doing something I've heard about and always wanted to try... but hadn't until that point.  And that is cooking a fine steak directly on a bed of hot glowing oak coals... no grill... just throw the steak directly on the coals. About three or four minutes per side (depending on your preferred "doneness") and we all agreed it was one of the better steak dinners we've ever had.  Exceptional.

Our three days at Park Sierra just flew by and, after some warm goodbyes, we hit the road again this morning. Our drive today was 310 miles of mostly CA-99 and I-5. Along the way (and thanks to Gas Buddy...) we found diesel for 3.959/gallon, loaded up with 80 gallons, and almost felt like thieves. But it sounds like diesel might be slowly rolling down in price right now and we could see even better prices in the near future.

That's it for tonight.