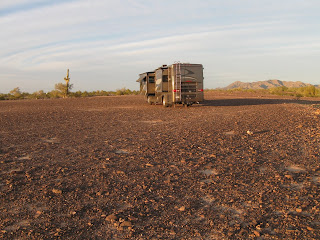 This past Sunday, March 3, we departed the SKP North Ranch Park and headed for a boondocking spot in Quartzsite. The chosen route took us a few miles north to the booming metropolis of Congress where we picked up AZ-71 westbound. At Aguila AZ-71 ends so we turned west on US-60 which set us up for an hour drive to Brenda, where we caught I-10 for about 10 miles before exiting at Quartzsite. We've been to "Q" a bunch of times in the past and have developed a liking for the area around Plomosa Road, north of town. In short order we were out there and found an agreeable spot a short distance from where we camped the last time we were here.

First things first... as soon as we were settled I suggested a hike out to our rock intaglio. Long time readers may remember that during our stay here during Thanksgiving week 2011, we constructed our own intaglio (a design on the desert floor made by utilizing the varying shades and colors of rocks and the underlying dirt on which they rest). The reason we did so is to have a place to hike back to once in a while and to see how long it lasts while enduring the natural elements of erosion and the even more severe elements of human vandalism.

From camp it was a walk of about a mile, through washes and over flats, to our destination. Even at our leisurely pace, it didn't take long and we found it... with a little help from our GPS. And I was pleasantly surprised that it's still perfectly intact. No 4-wheeler damage, no vandalism, it was just as we left it almost a year and a half ago. A pleasant surprise. 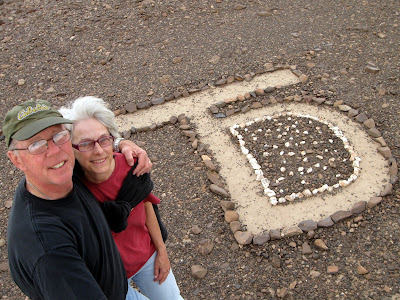 The weather was agreeable for the following few days... lows around 50; highs in the 70s. Some wind, but not enough to cause any problems. Our first full day, Monday, we made a run into town for a few supplies and a little firewood. There's no cutting or collecting of any wood, downed or not, dead or not... no getting wood from the desert BLM land at all. Don't even think about it. I suppose the reason is that some desert plants appear to be dried up and dead when they're still completely alive. And since plant life struggles so hard to exist in the desert, it certainly doesn't need people making things even more difficult. Let it be.

We did find some rather unconventional firewood, determined it'd do the job for our purposes, drove a hard bargain with the proprietor of the establishment, and were on our way with five bundles.

Back at camp we were growing concerned. Just a short distance from the bus-house, an area that had but one lonely fifth wheel camping trailer when we arrived, had five rigs by Monday morning, and about a dozen by the time we got back from town... with more arriving every hour. This didn't look good for our solitude. We found out from some folks that happened by that it's a gathering of Blue Grass musicians and even more hangers-on... Blue Grass Groupies... that had been to an event in Lake Havasu City this past weekend and were re-convening to keep the good times rolling for a few more days.

We like blue grass music, but we're not fond of crowds when we're at "The Quartz". It's not the music we object to... it's the generators, the traffic, the general commotion that naturally comes with crowds of people. So Monday afternoon we decided we're moving first thing Tuesday.

And move we did... about a mile and on the opposite side of the road from the gathering. This time of the year there's no shortage of excellent desert camps around Quartzsite... there's plenty of space for everyone... and plenty of solitude for those seeking it. 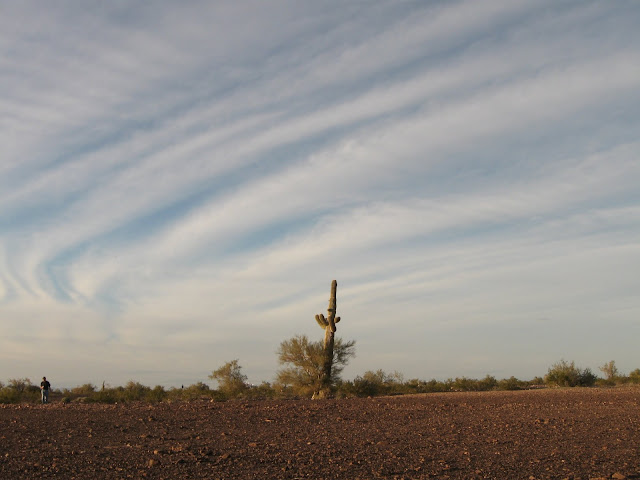 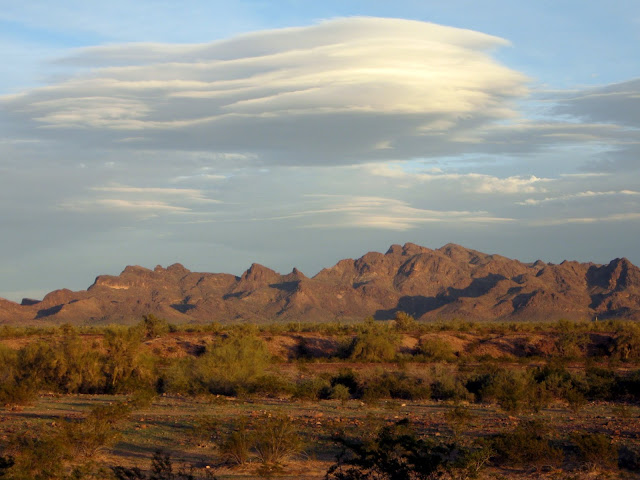 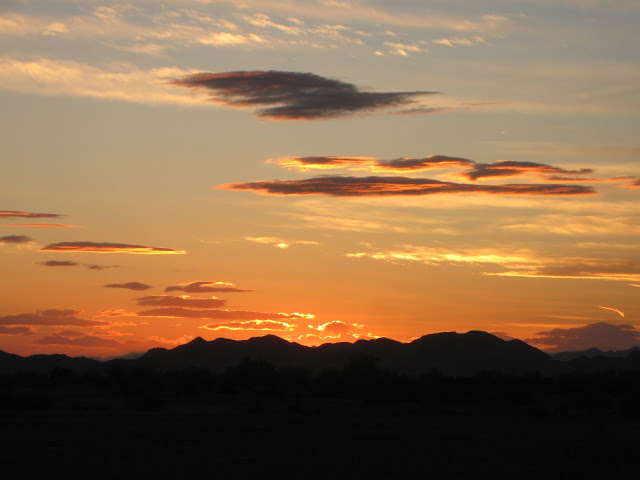