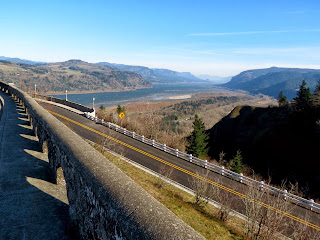 November 22 was a Friday. Coincidentally, it was also a Friday 50 years ago, the day John Kennedy was assassinated in Dallas Texas. For me, that date will rank right up there with the 9/11/01 WTC attack as a permanent memory. Even though I was only 12 I can remember much about that day... the weather, the somber mood of most people, the nearly constant TV coverage, and the way most people were glued to their sets all weekend long... trying to understand... trying to make sense of it all.

Our day started out along the Sandy River in Troutdale Oregon where we hooked up with a portion of the old historic Columbia River Highway. Now set aside as a tourist and scenic route, this was the first real road through the Gorge. Built between 1913 and 1922, it was, and is, a significant feat of engineering and must be driven to gain a real appreciation of the accomplishment. There are only a few sections of the old road that are preserved; much of the original was sacrificed to the second Columbia River Highway during the 40s and 50s, which evolved into present-day I-84.

We stopped at Vista House at Crown Point for the famous overlook of the Gorge... and were almost blown away. Literally. And it wasn't the view that was the cause. During Winter months high-pressure systems often set up over the east side of the Cascades; at the same time low-pressure can persist on the west side. When air rushes from the high-pressure to the low, and the Cascade Mountains get in the way... the channeling effect of the Gorge concentrates that air flow into a relatively small space... and high winds are the result. We later heard reports of gusts over 80mph up there today... which might explain why it was so danged hard to walk (honest, dear reader, at that point I had nary a beer yet). One had to hang onto stout metal railings to brace against the variable gusts. About the time you think you've got it down (walking in a 50 mph wind) an 80mph gust comes along and, well, upsets everything. Over the years we've experienced some pretty good breezes up there, but today was a new one for us. 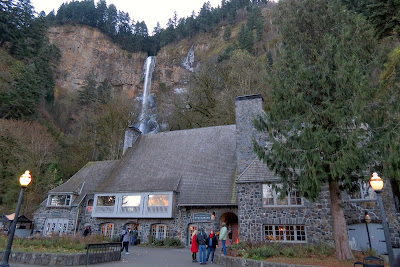 A ways further up the Historic Highway we stopped at Multomah Falls, a popular tourist stop for many transiting the Gorge as it has it's own on/off ramps from I-84. Last Spring my Grandson Ryan and I hiked to the top of the falls in one of those outdoor "bonding" opportunities with the younger generation. Today we didn't hang around here long either; just long enough for a few pics of the falls and a quick tour of the Lodge.

Next up was Hood River. If the Gorge has a cultural "Capital", Hood River is it. A small town (5,000??), it has an artsy, counter-culture, affluent vibe that feels pretty good. Wind surfers flock here to take advantage of those persistent Gorge winds. Other constituents of the vibe are a collection of wineries, a craft brewery, galleries, orchards, music shops, board shops, trendy eateries.... all in the shadow of Mt. Hood, a mere 25 miles to the south.

It was lunch time. We found the pub/restaurant/tasting room belonging to Full Sail Brewing and soaked in a mostly liquid lunch of fine craft beer to replenish precious bodily fluids and electrolytes so important to vigorous life.

Our easterly course changed to southerly as we picked up OR-35 and started the climb up to Mt. Hood. From Hood River to Timberline Lodge on Mt. Hood (our destination) is an elevation gain of almost 6,000 feet over about 30 miles. The road follows Hood River (the river, not the town) for a good portion of the route. Away from the Gorge the winds subsided too... and the day was bright, sunny, and warm-ish for late November. The views of the mountain, it's peak blanketed in fresh snow, were one of the things we were here to get re-acquainted with. I suppose if I lived up here, had a great view of the peak from my cabin, I'd eventually stop seeing it the same way. But I don't, and I still thoroughly enjoy being up here... being on the side of this still-venting and potentially active volcano.

From the community of Government Camp at 4500 feet and at the summit on US-26, there's a road called Timberline Highway that continues ascending all the way to Timberline Lodge. I've written before about Timberline [here] so I won't get into all the history and design of the place. But it's been a couple years since we've been here and it felt good to get back to one of the places in Oregon we find so enjoyable. 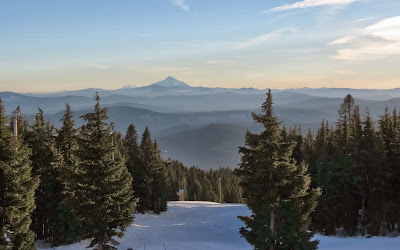 There was enough snow that skiers and snow boarders were swarming the hill despite it's "not officially open" status. From 6,000 feet, views of the surrounding landscape are spectacular on sunny days; the neighboring peaks of Mt. Jefferson and the Three Sisters to the south rise like far off islands in a turbulent Cascade "sea". We wandered around the lodge renewing old memories, recalling historic facts and trivia, and carefully performing our official inspection. The old place is holding up well. We settled at a window table in the Rams Head bar, with full view of the mountain. From there the peak is three miles away horizontally and one mile vertically. Bright sun on the ultra-white snow made viewing a squinty, almost hurtful, experience... at least until the eyes could adjust. We lingered, we talked, we pondered; we love being in the Northwest. 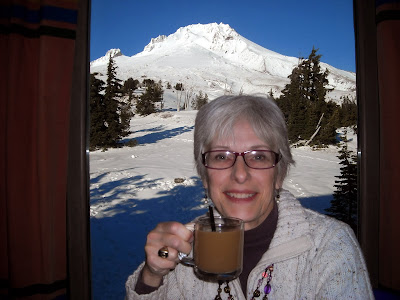 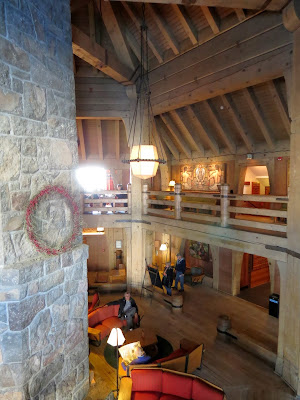