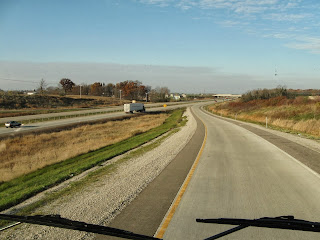 Hey, we're on the road again.  After almost 6 months it feels good to be moving, that's for sure.

Yesterday we moved the bushouse off the RV pad at the farm and onto a temporary one-night "stand" nearby. The truck camper took the bushouse's place on the pad... and went into "cold storage". It'll sit there... unused, winterized, loaded and ready to go... until we return and retrieve it about a month from now. (more on that later).  Considering the 24f degree temps last night, the bushouse easily rumbled to life at first light this morning, raring to go. If I didn't know otherwise I'd say it was as anxious as us to hit the road. The only unforeseen issue was a frozen tv batwing antenna which cold-welded itself to it's base... no turning... no dropping... and us not going until stowed.. The steady rain of the previous few days and the hard-freezing temps combined to make life a little interesting... especially if you're the one who had to crawl up onto the roof, negotiate the full 40 x 8 ice skating rink up there, and free the problematic antenna.

Before 8am the wheels were turning. An early-ish start was needed to keep a burning ember of hope alive that we'd make my planned 400+ miles before the sun set. The route was an easy one... US-151 through, around, or near Madison, Dodgeville, Platteville (all WI), Dubuque, Cedar Rapids, Iowa City (IA). Hop on I-80 west, circle around Des Moines, and head for Omaha... but we stopped for the night in the little town of Shelby Iowa. We found an electric plug-in at a motel/RV park near the Interstate to help fend off another night of 20f degree temps. And that's where I'm writing this post.

Tomorrow will be more of the same.

In my last post I discussed our plans to first take the bushouse out to Oregon and then return to Wisconsin, probably in December, to pick up the pick up (get it?) and camper. My first thought was to fly back. But smarter people than I thought it might be cool to "rail" back.  That's right, Amtrak. The "Empire Builder" has both Vancouver Washington (about 10 miles from our daughter and son-in-laws house) and Columbus Wisconsin (about 10 miles from family in Beaver Dam) included on it's list of stops between Portland and Chicago. And not only that, a cross-country passenger train trip has been on my bucket list for years. This has the makin's of a very cool trip. 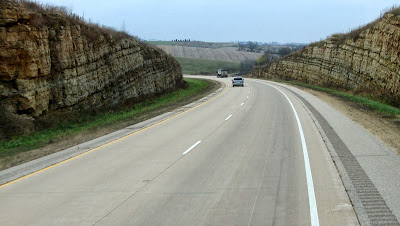 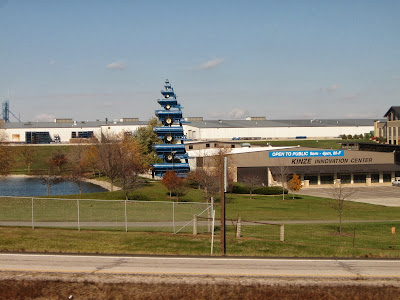 I've traveled around the country on Amtrak. Very relaxing. Just go with the flow and don't get upset about schedule delays.

We will be very interested in your blogs about the Amtrak Trip as we have that on our bucket list. Sure am enjoying your blog.
Happy and safe travels to you