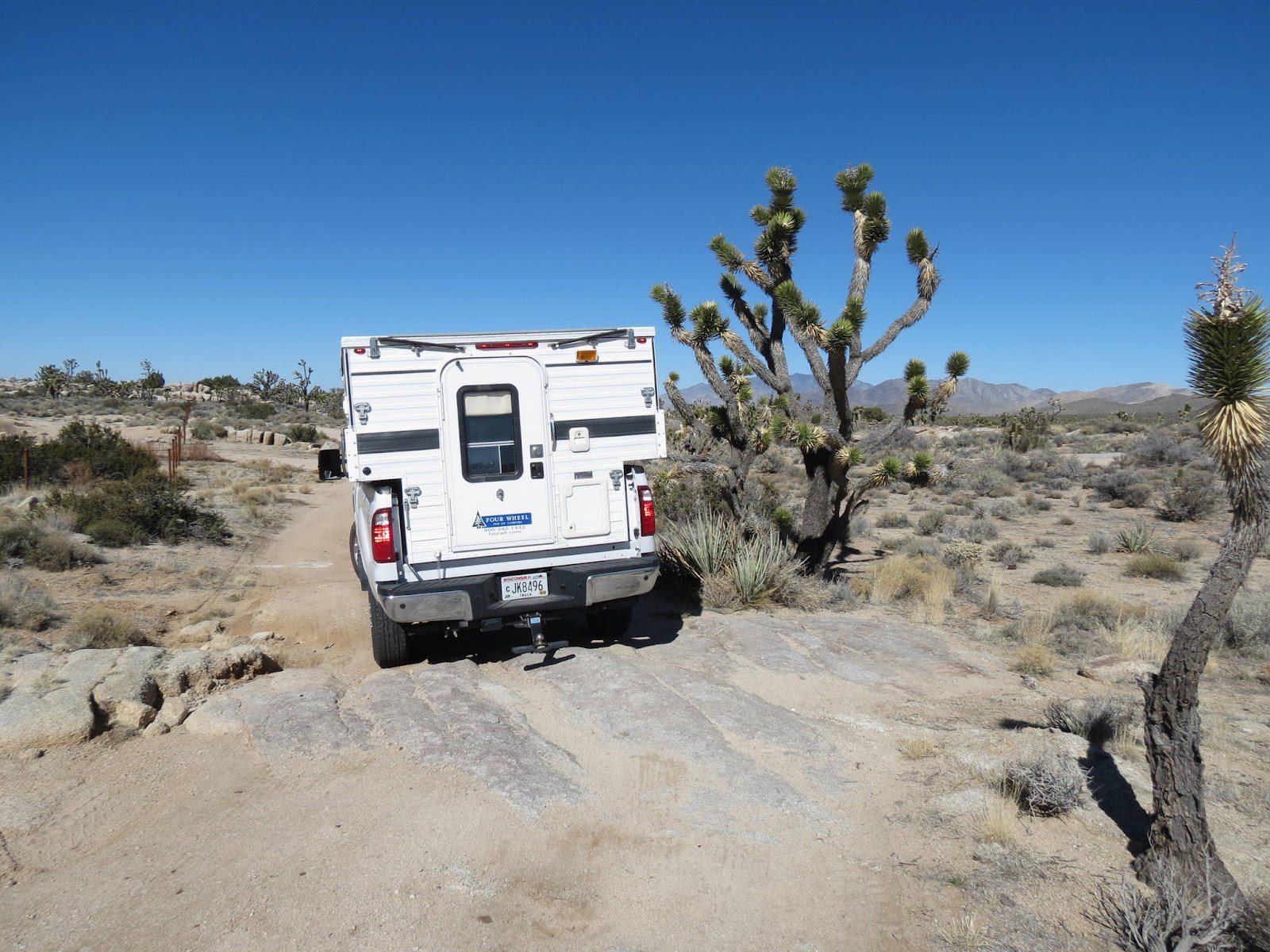 We’re told that February in Mojave is usually colder than what we’ve been experiencing, and often windy. We have the wind but we picked a good week to be here for the mild temps.

Woke after a good nights sleep, broke camp, and headed north on Black Canyon Road. At Cedar Canyon Road we drove east to the Rock House and kicked around there for a while. Originally built in 1929 by a disabled veteran from WWI named Bert Smith, he lived here for 25 years. It’s second long term resident was artist Carl Faber who lived here in the 1980s. It’s a stout structure with thick rock walls that’s held up very well through the years. It’s still used occasionally by the Park Service for special events. 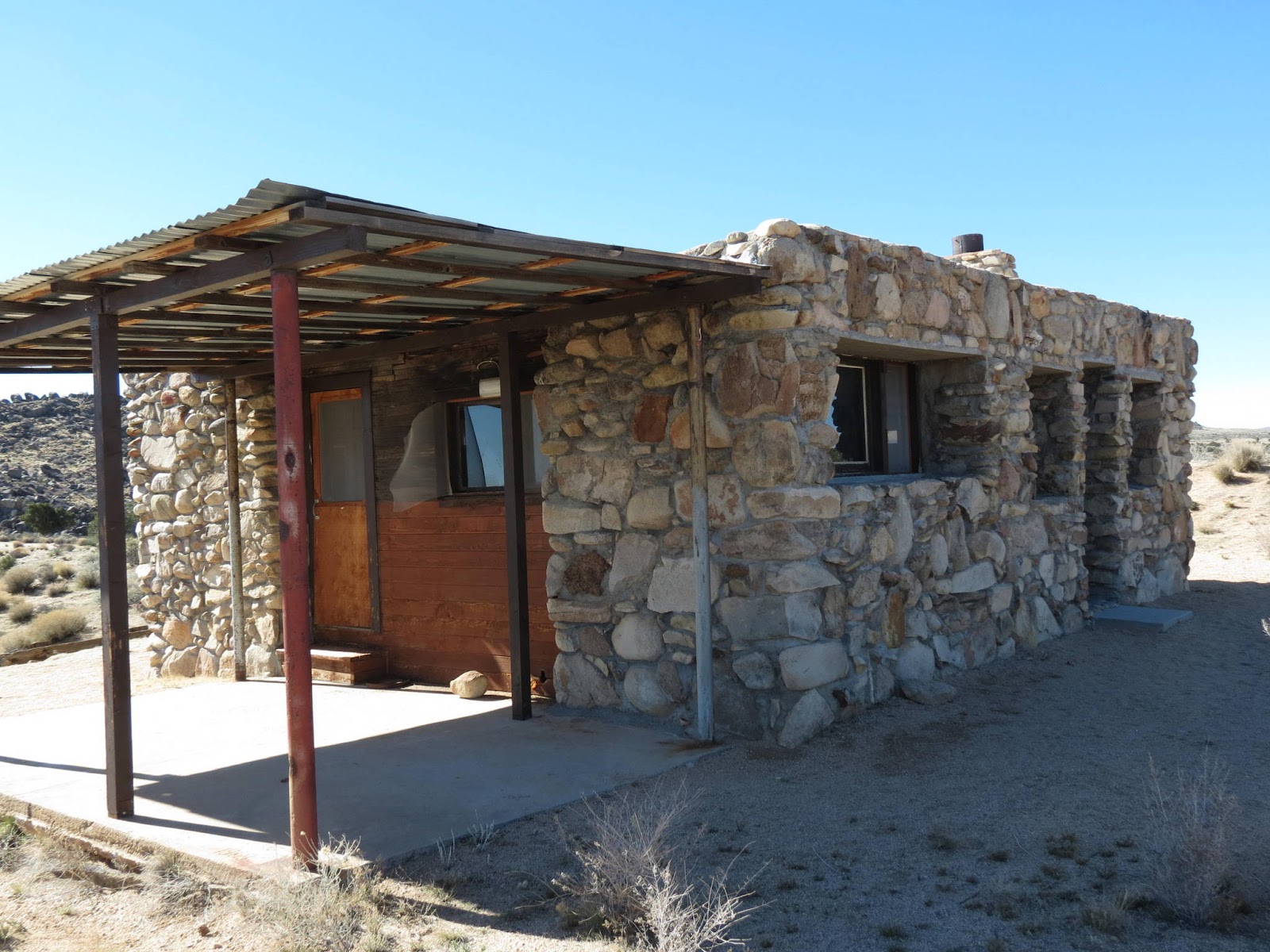 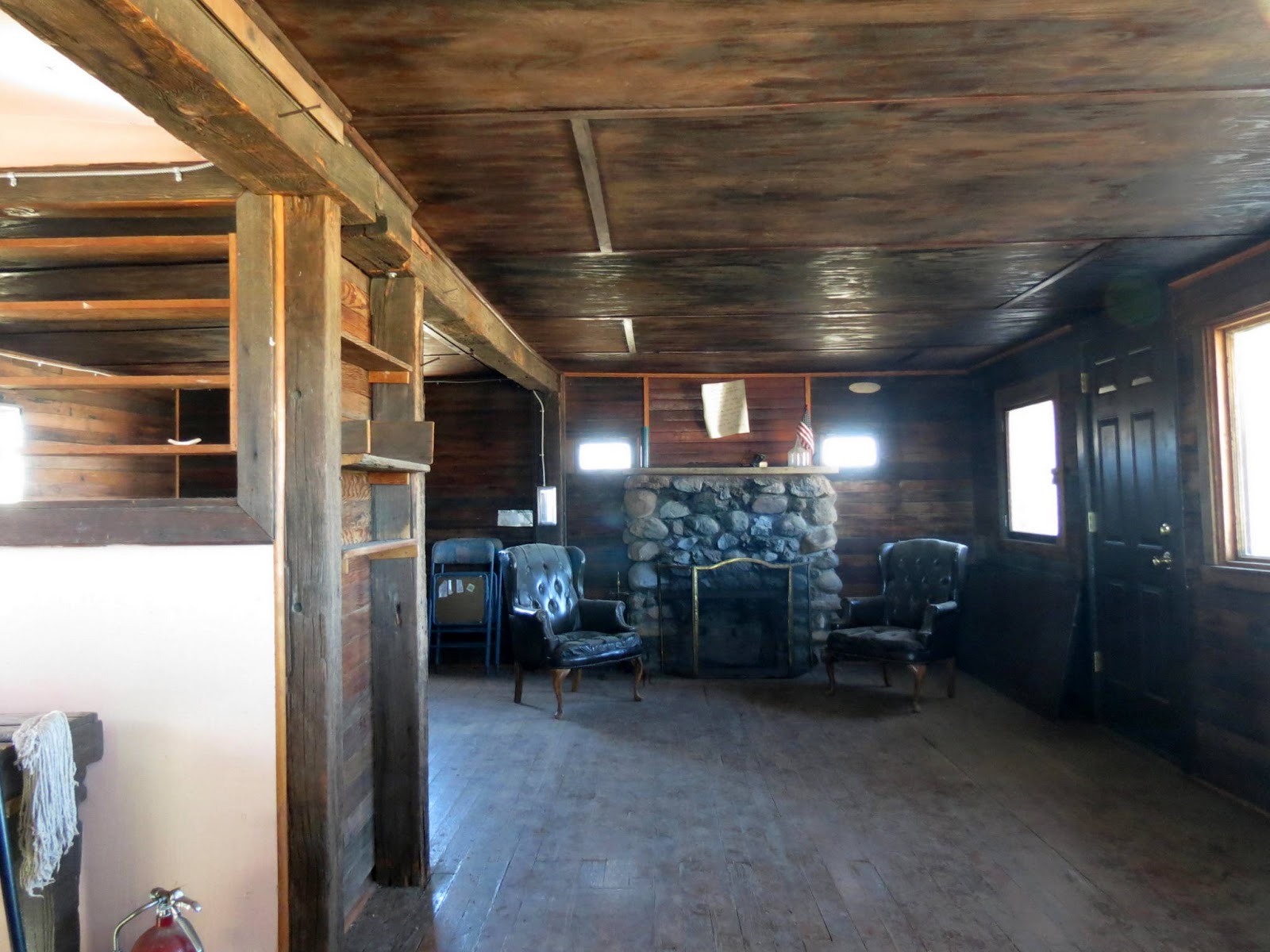 Reversing course, headed west on Black Canyon Road, until it intersects with Kelso Cima Road. We stopped here for a bit to let ourselves and the truck stop vibrating from the rough corrugated dirt park roads. There are two other interesting views from this point: first, the Cima Dome, a large gently sloped volcanic landform that dominates this area of the park. If one doesn’t know what to look for you very well might miss it. Additionally, this entire area of the park is covered with Joshua Trees. A Joshua Tree forest. Miles and miles of Joshua Trees. In fact, it’s the largest and most concentrated stand of Joshua Trees in the world.

The second interesting thing is the old historic Mojave Road. As we were approaching the intersection with Kelso Cima Rd. we could see a brown line through the Joshua Trees for miles directly ahead and in alignment with the road we were on, heading west and fading into the distant hills. This is the old Mojave Road. Running east/west through the middle of the Preserve it’s existed for hundreds of years along this path, used by natives even before Europeans came to the west. Today, it’s still possible to bisect the preserve from one end to the other on the Mojave Road… but high-clearance and 4wd are highly recommended.

While we were out of the truck wandering around the first few feet of the old historic road, trail really, wondering if many folks still use it, a California Highway Patrol officer comes flying up, turns off Kelso Cima Rd, onto the old dirt road, and quickly bounces and bobs away into the distance in a flurry of dust. We looked at each other and again at the fading police car… and simultaneously started humming the theme song for the old 50s TV show Highway Patrol (starring Broderick Crawford). You had to be there to appreciate it. 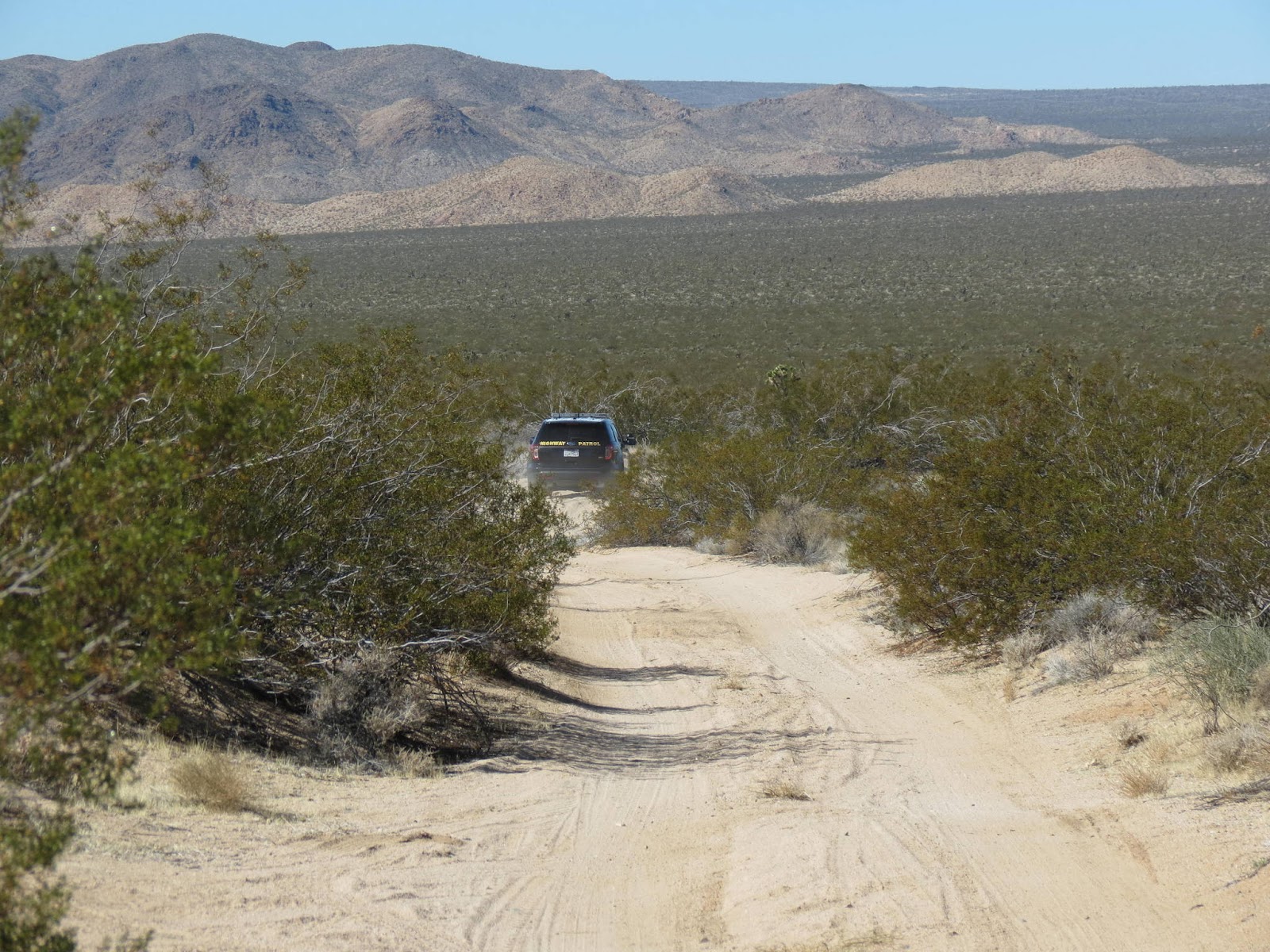 I had filled the truck's gas tank back in Parker Arizona, taking full advantage of the lower prices in hopes that we’d be able to explore the Preserve and make it back to the sunshine state without having to shell out hard-earned social security dollars for California's higher-taxed fuel. Well, things can be deceiving out here. The unit of distance back east may be measured in minutes, but in the west it’s measured in hours. It also seems that as distances grow, gas tanks shrink… significant shrinkage. Many a traveler through the west has become convinced of the validity of an expanding universe, especially when looking for rest areas. Also, slogging along dirt and sand roads at 4 miles per hour, sometimes in four wheel drive, chews up a lot more gas than even the most persnickety planner could imagine. At any rate, we needed gas. And there is no gas for sale anywhere inside the Preserve.

Being the smart guy I am, I pulled out a map and found that we were only 25 miles or so from I-15, which makes up the northern edge of the Preserve, and an exit, an intersection where Cima Road and the Interstate meet. Resources also indicated there was a gas station there.

Now I understand the principle of supply and demand. I know, having taken a number of economics classes in college some years ago, that when supply is limited and there’s a strong demand for that limited supply, that prices might edge upward a bit… that it’s the invisible hand of capitalism at work… it’s what makes our nation great. But when we arrived and pulled up to the pump at the only gas station in sight, and I saw the price… well, I didn’t feel so smart. And I shed a small socialist tear. The same gas I was buying in Arizona for around $2 was being sold here for just shy of $4. And everything inside the C-store was similarly priced… times two. Wow.

By the time we pulled back onto Cima Rd. with a full tank and a few meager supplies, and headed back south into the Preserve, I felt like someone had stuck a gun in my ribs and lifted an extra $50 bill from my wallet. Beware grasshoppers. 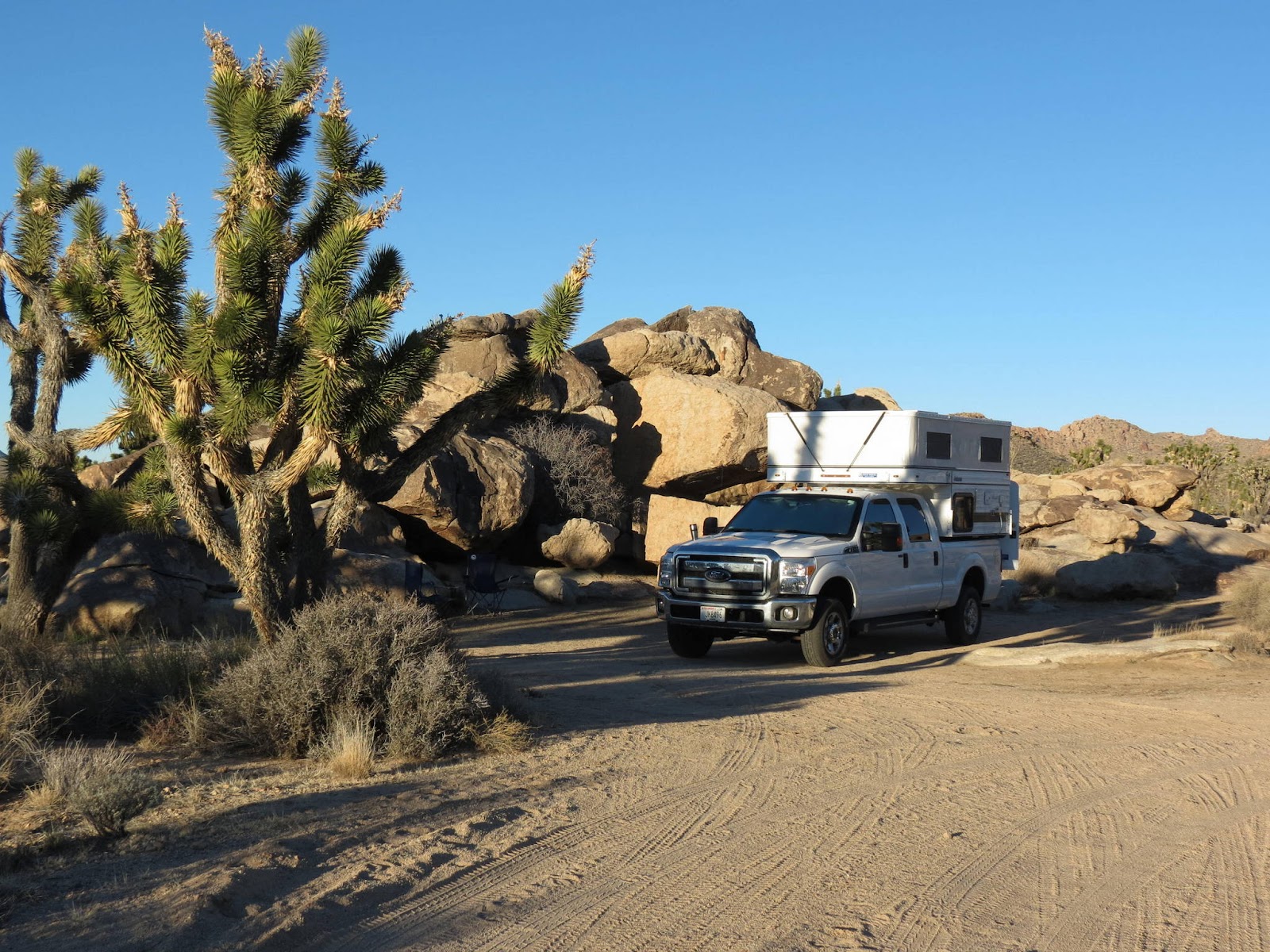 About 12 miles from our economics lesson for the day, near the “white cross” VFW memorial to WWI veterans, we found a very agreeable boondock camp for the night. Not one of the two spots near the highway, this spot is back a good quarter mile down a dirt two-track trail… and was far more remote feeling than that quarter mile would indicate. We’re high here… on the flanks of the aforementioned Cima Dome, surrounded by Joshua Trees at about 5000 feet. With singing coyotes and a bright starry sky, sleep came quickly.