June 29, 2015
One of our main reasons for coming this far north was to visit the village of Tuk. It's actual name is Tuktoyaktuk, but for obvious reasons, most people just say "Tuk".

At this point the only way to get to Tuk in the Summer is by boat or by plane. There is no all season road. In the Winter, there is a winter ice road scratched out on a branch of the frozen Mackenzie River. And they are in the process of building a new all season road over the tundra and permafrost that's supposed to be done in a few years. They can only work on it in the winter, so it's hard to say exactly when it'll be done. And, with a number of companies offering Tuk tours, there are at least some people who aren't real crazy about seeing that new road completed.

So what's the attraction in Tuk? Well, it's further north than Inuvik. Among the people who come to this corner of the world, being north is a big thing. The other attraction is that Tuk is situated on the shores of the Arctic Ocean. There are only a handful of places in North America where a regular guy and gal can get in their pickup truck, drive close to the Arctic Ocean, and dip their toes (toe dipping is another big thing up here). The Dempster to Inuvik is one. Another is the Dalton Highway in Alaska, aka "The Haul Road", that runs up to the vicinity of Prudhoe Bay. The problem with the Dalton is the amount of truck traffic related to the oil industry.

So, we booked a tour to Tuk. You talk to the tour company, you pay the not-insignificant charge, and you show up at the appointed time (in our case 6pm) when they van you out to the airport and load you into a workhorse Cessna 207 for the 45 minute flight to Tuk. 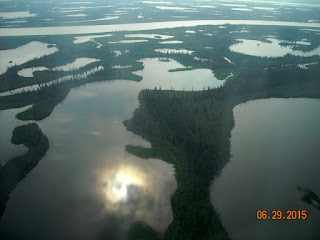 From our perspective, the flight was the real highlight of the tour. The late day low light (remember, 24 hours of daylight), illuminated the massive Mackenzie Delta system which is stunningly beautiful. An unexpected treat. The pilot also points out a Dew Line radar station that was used to keep an eye on the Russians during the cold war, and a number of Pingos, pop-up tundra landforms that result from successive cycles of freezing and thawing.

In Tuk, a native resident took our group around the village. I must be careful here. People around the world live in varied and sometimes extreme conditions, and in ways that many of us in the USA would consider crude. I'm sure many of the residents of Tuk are happy. It would be difficult for me to be happy there. I saw a poor village, abandoned and vandalized houses and other buildings, dirt streets, a museum-like collection of broken and rusting snowmobiles outside every house, mosquitoes so thick it was hard to be outside, mud. Because of the permafrost on which the town is placed, there can be no water or sewer system. Instead, trucks run from house to house, multiple times per week, to deliver fresh water and remove the sewage. The tanks which hold this material must of course be inside the heated envelope of the house or they'd freeze solid.

To be fair, there were some decent houses, some businesses that appeared to be doing well, and a bunch of kids actually playing a pick-up baseball game instead of sitting in front of a computer or television. They must have built up an immunity to mosquitoes. We dipped our toes in the ocean and left.

From what I could gather, it's largely a subsistence existence. Many fish and hunt, some still pursue whales in the traditional manner, the meat must be preserved and prepared. Some folks work as there are some regular jobs with the businesses in town... construction, small retail, etc. But there are many on public assistance. Depression and suicide is common. Our woman tour guide lost her 17 year old son to suicide. We can speculate and theorize as to the reasons. But it's there. Perhaps an all weather road will help those who need help... prevent people from feeling like there's no way out. Perhaps not.

Perspective is a funny thing. Our trip north involved stops in successively more "northern" towns. When we stopped in Whitehorse YT, we thought we were really north... until we got to Dawson, further north yet... until we got to Inuvik, really "up" there... until we got to Tuk. From Tuk, Inuvik is the "big" town down south where they go to shop the "big" stores, for more specialized medical care, to connect with a real road. To the Inuvikians, that next big town south is Dawson. To the Dawsonians, it's Whitehorse. Everything is perspective.

Our trip to Tuk was good. It was a glimpse into the lives of much hardier people than I'll ever be. 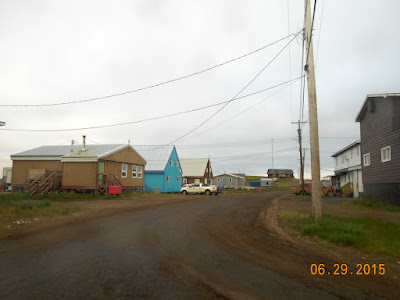 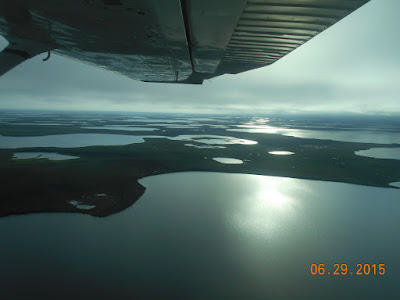