The Fairbanks area was our focus for the first half of the week. As we began our southeasterly trek on Wednesday it really felt like the beginning of our trip home. The next few days had us camping in a series of government campgrounds both in Alaska and Canada.

Stayed home today and worked on blog and photo stuff. Sometimes you just gotta have a “down” day to recharge the batteries (both the camper’s and mine), loose yourself in the pages of a book, and experience a little solitude. 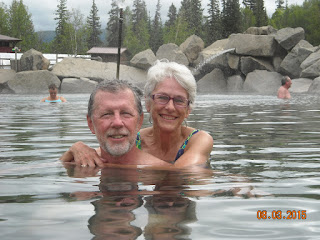 Decided to go up to Chena Hot Springs today. Some travel guides say this is a must do in the Fairbanks area.

The hot springs are northeast of Fairbanks on a good 50 mile long road that dead-ends at the destination... about an hour and a half drive with a few stops along the way. Because there's minimal traffic, especially on a Monday, it was an especially relaxed and enjoyable drive.

Chena Hot Springs is really a complex complete with lodge, restaurant and cafe, activity center, an ice museum, air strip, reindeer herd, it's own power plant... all in addition to swimming pools, hot tubs, and a large rock-line outdoor soaking pool where we spent much of our time.

Besides a soak and long hot shower... we had lunch and then did the ice museum tour. A couple from the area (ref) have a workshop in the building and create these large and intricate ice carvings. These are true art pieces and these two are real artist. The results are nothing short of spectacular. Because this art must be frozen (obviously), sublimation (ice changing directly from solid to gas... skipping the liquid phase) is an issue. But due to the museum's policy of limited entry and consistent temperature and humidity, it's a slow process. Our guide pointed out two longer term items... one 5 and the other 11 years old. Both have had a few finer features (like a finger) replaced due to sublimation.

Everything in the museum was made of ice including two ice motel rooms; an ice bar (where they served real appletinis in carved ice glasses); and an ice altar where couples can (and do) get married once in a while. The two ice artists made it for their own wedding. These ceremonies tend to be sh... shh...ort. For some, it's appropriate that their life together starts out chilly. For the tour, the museum provides one-size-fits-most coats, Tour lasts about an hour and costs $15.

On the way out to Chena Hot Springs we had checked out a couple state campgrounds, which were neat, maintained, and perfect for our needs. But we also learned there's a number of other places where we could drive down to the river (the Chena River, of oourse) and camp on a gravel bar. And that's what we did. Tonight, we're hard on the banks of the North Fork of the Chena River, across from the Granite Tors campground. 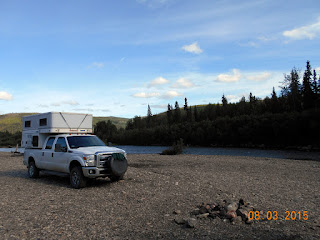 Getting cooler at night. Saw 46 early this morning. But the same clear sky that let the heat escape will make for quick warming as the sun climbs this morning.

We drove back to the Fairbanks area on Chena Hot Springs Road but made a slight detour a few miles north on the Steese Hwy to a Trans-Alaska Pipeline viewpoint. Could wander around and under a few hundred elevated feet of the beast that was built in the mid 1970s. It was quite an engineering achievement as provision had to be made to keep the hot oil (about 100 degrees at this point on it's 800 mile trip south) from melting the permafrost. Wherever the pipeline traversed permafrost it is above-ground and supported on structures designed to dissipate heat and keep the ground frozen. The 48" pipeline itself is wrapped with insulation too. Due to the normal production decline over time of oil wells, these days the line is currently at less than 50% of it's full capacity. 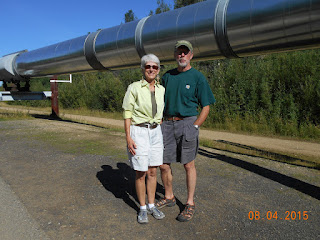 After a foiled attempt to have lunch at the Silver Gulch Brewery (didn't open till 4pm), we next headed to the University of Alaska Museum of the North. An informative and entertaining experience, we immersed ourselves in geophysical, cultural, and historical aspects of the 49th state. If you're at all inclined to seek out mind broadening things like this, I'd highly recommend stopping.

Burdened by that parched throat one tends to get after a couple hours in a museum environment, we sought, and found, Hoo Doo Brewing's brewhouse and taproom. It didn't open until 4pm, but we're slightly surprised when we drove in and had a tough time finding a place to park. It's situated in an industrial area and their parking lot has room for maybe a dozen cars or so. Others must park alongside area roads and walk to the "hoppin" (intended) joint. Despite the crowd, it didn't take long for them to pour a couple of their finest craft creations and we found a spot at a large cable reel table to kick back and relax. I was assured by the staff that this was not an exceptionally large crowd. The place really gets going on weekend nights. Definitely one of the places to be in Fairbanks.

Time to find camp. Dar had picked a state recreation area near North Pole called the Chena Lakes Project to check out. This was a COE project constructed after the Chena River flooded big-time in 1967... almost wiping out all of Fairbanks in the process. As the COE tends to do, in addition to all the diversion channels, lakes, and dikes, they included serveral recreation areas for the public. This included two very nice campgrounds. We found a spot in the Chena Lakes CG and dropped anchor for the night.

First on the agenda this morning was a stop at the Santa Claus House in North Pole. I did not go in, preferring to wait in the truck, work on my blog post for the week, clip my fingernails, and think a little about income tax strategies for 2016 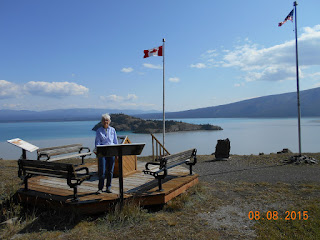 On the drive today we drove along Kluane Lake, a spectacular many miles long lake. Actually, our camp at Congdon Creek last night was also on this lake. Near the southern end we stopped at a visitor center for the Kluane National Park and also visited Soldier Summit, the point of the official ribbon-cutting ceremony that opened the Alcan Highway in November of 1943. Since the highway has been realigned since that time, getting to the actual site of the ceremony involved a short hike. We get a kick out of historic places like this and walking along the now abandoned original route of the highway. It may have been primitive but it got the job done. Almost 1500 miles of road made usable in less than one year.

Had thought about extending another night at Congdon Creek, but after running into Destruction Bay for fuel and a light lunch, decided to hit the road again. It was just too nice a day to not travel. The splendid mountain scenery led us ever further southeastward.

We've been considering our options for the Haines and Skagway area. We could, on the one hand, drive the 150 miles from Haines Junction (on the Alcan) down to Haines, see what's going on, and drive the 150 miles back up to Haines Junction to continue our journey. Or, on the other hand, we could take a ferry from Haines to Skagway, which means we'd drive the South Klondike Hwy back up to the Alcan near Whitehorse. With option one we'd be able to say we've driven every mile of the Alcan when our trip is over. With option two, we'd be saving about 250 miles of driving (think gas, wear and tear, etc.). As this is being written, a decision has not been made. Stay tuned to next weeks post for what we decided. 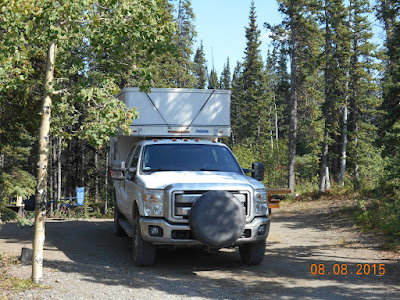 From Haines Junction we headed south toward Haines and a campground Dar had identified as a possible camp for the night. Kathleen Lake CG in the Kluane National Park of Canada seemed to hit our sweet-spot, so we made camp for the night. We've not stayed in a Canadian National Park before this. It was similar to the Yukon Territorial campgrounds, with one slight twist: they had a flat charge of $8.80C for firewood. For that fee, you could use as much wood as you could burn. Since we started early, we had a grand fire.

The weather really cooperated with us today. It was one of the best in recent days.