Where’d You Get Them Peepers? 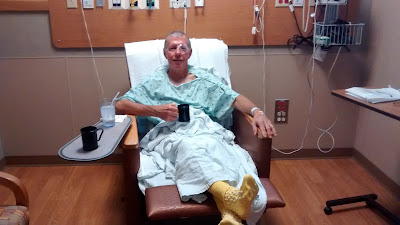 Well, it turns out this is the year. Tests and measurements of the worst eye indicated it’s time to get on with it. Wasting no time, I signed up for the next date open on the surgery calendar… about a week out. One eye would be done and the other a couple weeks later. There was a 3 day period of prep, a series of eye-drops that needed to be installed in the target eye, and the wait.

I arrived bright and early on a Tuesday and reported to surgery, my trusty patient advocate and moral support at my side. Mustering up courage and my best game-day face, I struggled to keep things light by bantering with the staff and joking around a bit to keep my mind off the chamber of horrors in the next room. It was fine. I’m going to get through this.

I don’t remember much after getting to the operating room. I climbed on the table, positioned myself where they wanted me, an injection of a drug cocktail including versed, my personal amnesiatic of choice, and I was in la-la land. Vague memories of 70s music… some conversation… the doctor talking his way through the procedure… and it was over. I’m told the procedure usually takes just 12 to 15 minutes, but it seemed like just a minute or two to me. Just another minute or two to come out of the drug stupor and I climbed down off the table and into an awaiting wheel chair for the ride to my prep room. Into a recliner, cup of coffee, and the best toast I’ve ever eaten.

One must be a little careful the first few days after cataract surgery. No bending over or heavy lifting or anything that could cause strain or raise the blood pressure. I was fine with that, mellowing in the afterglow of knowing that it was over.

Anyway, the eye healed and I was happy with the result. My previous prescription glasses no longer worked. As expected, I will need reading glasses for close-up work, but the clarity and crispness of my new vision is really something. I wonder what Alaska looks like with these new peepers?

A follow-up visit to the eye doc proved that all was going as it should for the first eye, and that the second eye would be following along just a couple weeks later. That procedure was an almost identical repeat of the first.

And now I’m done. Two eyes… two new lenses… new clearer and crisper vision. In a few more weeks I’ll get a new prescription for glasses, but I can tell already that it’s quite possible to function without any correction at all for most things. I can even read without glasses if I hold what I’m reading at a stretched arms length. A remarkable ordeal. A remarkable change for the better.