The House On The Rock

Just north of Dodgeville along highway 23 there are a series of ridges and valleys that have formed over the millenia as water, flowing toward the Wisconsin River, differentially eroded away layers of sandstone and limestone that make up the underlying ground around here. The softer material washes away and the harder material remains as steep-sided hills and a few rocky spires -- tall, thin rock columns -- that rise from the valley floor.

In 1945 a man by the name of Alex Jordan started building a Japanese House on top of the 450' tall Deer Shelter Rock, one of those rocky spires. A quiet, reclusive man, Jordan's idea was for this structure to be a retreat -- a place to get away. But as his project grew and people heard about this unusual thing, they'd come by to see what was going on. The story goes that he started charging people a dollar to tour through the small structure way up there on top the rock, as a means to offset some of the cost. As more people came by and the dollars grew, he added to the house. And the more he added to the house, the more people came. In 1960 he opened the house to the public.

About 10 years later, before Dar and I were married, we visited The House On The Rock. At that time there were only the house itself, a gatehouse, and another building or two that were under construction. The attraction was primarily the house.

During the 1970's and early 1980's the place grew faster than a heffer on high-protein feed, and Jordan's interest in oddities became a compulsion. It's now really an amusement park of sorts. There are large buildings that hold strange collections -- assemblages -- of dolls, guns, suits of armor, automated musical instruments, theatre organs, and much, much, more. There's an exhibit that recreates a 19th century main street; another that has a sea theme complete with a 200 ft. long sea monster; another focused on aviation; and yet another that contains the worlds largest working carousel.

On Tuesday we visited primarily to see the original house which I still find interesting -- an architectural curiosity and an exercise of imagination. I'm not much for the collections. There's still a lot of construction going on so apparently the new owners (Jordan died in 1989) are still making a go of it. Unfortunately with all the buildings and mature trees it's tough to even get a picture of the exterior of the original house. This picture is from their website and was taken in the early 1960's. 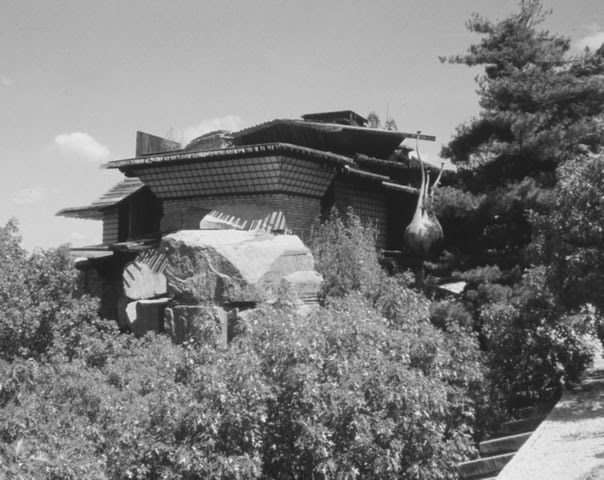 I'd put The House On The Rock on the list of places that should be visited once... but probably not more than once.

Next on our agenda was a stop at Governor Dodge State Park. We had a quick picnic lunch alongside one of the two lakes in the park and found a two mile hike that was perfect for exploring and learning about the unglaciated "driftless" area of Wisconsin. We also checked out the two campgrounds in the park for future reference.

It was a full day and the weather was great all day. A wonderful way to spend a sunny fall day in Wisconsin.