Showing posts from July, 2009
Show all

The Quirky side of EAA 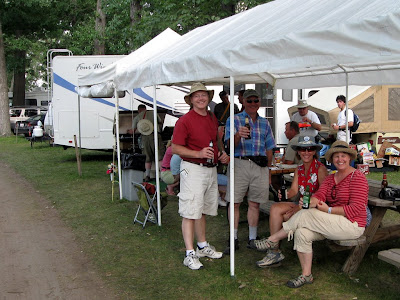 As I write this morning, a light rain is falling and things are quiet around the show. We've had a couple nearly perfect days so a little rain won't dampen spirits too much.

We're having more fun than we expected at AirVenture 2009. There's a real sense of fun that's evident with almost everyone you meet. Sometimes that fun runs more toward the quirky -- I thought I'd pass along a few examples.

We were driving around the grounds last night with our son Justin and his bride Kaytlyn. We wanted them to experience some of the ambiance of the showgrounds after hours. As we were driving down this one road, a sofa suddenly pulled into traffic ahead of our car. That's right -- a sofa. There were three guys sitting on it just as if they were at home watching TV -- seemingly unconcerned and nonchalant to the fact that they're riding on a sofa in busy traffic. It was, somehow, running down the road sideways, lengthwise, on hidden wheels, under…
Read more

Some of my earliest memories are of airplanes. I think I've been hard-wired to be in awe of things that fly. And I've never lost that interest. I had my first airplane ride when I was 5 and when I had a little spare money as a young adult, I took flying lessons and earned a private pilots license.

We lived most of our lives in the upper Midwest and during the 70's and 80's and we'd often make the easy trek to Oshkosh for a day or two to join in this crazy celebration of flight. The EAA organization is built around the idea that flying can be for everybody... not just the rich. A lot of members... tenacious, diligent, passionate souls all... have built their own planes from ideas in their heads, or from plans they purchased, or from kits. They've spent thousands of hours carefully putting these flying machines together and a fairly high percentage actually make it into the air. What a day that is when a couple man/ye…
Read more

We love the Upper Peninsula of Michigan. In both '07 and '08, we spent nearly a month enjoying the cooler summer and the isolation that comes with the territory. This year our visit will be much shorter -- 6 days. Because we've scheduled the EAA Airventure Convention, which is next week in Oshkosh, WI, and because we're heading west earlier this year, we're trying to cram a months worth of enjoyment into less than a week.

The mosquitoes aren't making it easy though. And the weather has been less than perfect. Being chased by swarms of the little black biters while dodging rain showers can dampen your enthusiasm for a place. And it's been cool too. I was told by a local fellow that this is the coolest summer up here in 25 years. I can't attest to that but he seemed to know. There have been some very nice stretches too -- I don't want to leave the impression that this has been pure…
Read more

Yesterday, Monday, we left The Farm about an hour later than my 9:00am target. But between light traffic and few road construction delays we made good time and arrived in Manistique about 4:30pm. We lost an hour to the time zone change and stopped for a quick lunch just north of Green Bay so actual driving time was just a hair over 6 hours for the nearly 300 mile jaunt.

The route took us North on US151 to Wis26 to US41 which we took all the way to Menominee MI. There, we picked up M35 which follows the Lake Michigan shoreline to Escanaba. That stretch, from Menominee to Escanaba, is about 50 miles and wins the prize as the most pleasant part of the drive today. Bright sunny weather, great road, a rare tailwind, and almost no traffic, combined with the low authoritative rumble of the Cummins diesel, the steady whine of the tires, and the wonderful views of the Lake and shoreline -- one of the more enjoyable and sle…
Read more

I graduated from Beaver Dam Senior High School in 1969... just a month or so before the first moon landing. That was 40 years ago. It seems trite to say it, but it just doesn't seem that long.

We were probably an average class. Out of 306 graduates there would be a couple medical doctors, a lawyer or two, and a few that started small businesses. Many went on to college. No one became a celebrity or is considered famous. Most of us would work at jobs and careers, get married, have kids, and mow the lawn whenever it was needed. We put in our time, did what was necessary, tried to enjoy life, and watched as our kids grew and themselves graduated from high school. And the circle began again.

About 80 people gathered at Stooges Bar in downtown Beaver Dam last night for a reunion of the Class of '69. I hadn't attended for 20 years and hadn't seem some of these people for longer than that. As you'd expect, what I found, my impressions…
Read more

Nature has a way of keeping us on our toes. A couple weeks ago we were enduring punishing heat and high humidity. The past few days it's been positively spring-like, with low temps in the 50s and highs only in the 60s. Yesterday was cloudy and windy, blustery and downright cold. The high for the day was only 64f. I guess if you average the past few weeks together we're having an average summer -- just to show how misleading statistics can be.

The hitch receiver for the Focus arrived, so I took the opportunity to install it -- and it bolted on without a "hitch". So when the bike rack arrives I can finish up with that part of toad2. I  also took another long walk up the newly mowed hay field next to the barn here at the Farm. It's a half mile to the end of the field at the other end so making two round trips is a couple miles. I certainly need the exercise as I've been lax about it this summer.

Later this afternoon we'…
Read more

There was NO meal preparation at the bus-house yesterday. For lunch, we met Mom & Dad Hoch at Chili John's Cafe in downtown Beaver Dam. Chili Johns is an institution around here having been in continuous business at the same location since the 30's. We make it a point to visit whenever we're in town and soak in a little of that old-time tradition.

Then the "Thursday Night on the Deck" gang met again on the outdoor deck at Dos Gringos, the finest Mexican restaurant in Beaver Dam. Jan & Dave, Mom & Dad Hoch, and Dar & I convened to start the weekend (Yes, we officially start the weekend on Thursday night!!), chat about everyone's week, and find solutions to world problems. This is a fun group and we usually leave with sore muscles and watering eyes from laughing too much.

All the parts and pieces that will transform the new car into toad2 are dribbling in. No work is going to get done on that project until we ret…
Read more

When we started fulltiming in the bus-house two years ago we decided to tow my old 1999 Chevy Blazer (our toad) and hoped we'd get a year or two out of the old boy. It's over 10 years old now, has 150,000 miles on the odometer, and has been towed about 18,000 additional miles. It's been reliable and has only stranded us once, in Little Rock last fall. But time has taken a toll, as it does with everything. We made the decision over the past few months that replacing the toad would be the big summer project this year.

But the process of deciding what to buy was a long and winding path. First, our requirement that the vehicle be deemed "towable" (all four wheels on the ground) by the manufacturer, without any modification, was the first narrowing of the possible choices. As long as the manufacturer says it's OK to tow the car the warranty remains in effect -- something that's important to us. The list of vehicles in this c…
Read more

July 15, 2009
I found a way to work around the problem. The front page is now updated.
This is one of those times I have a real love/hate feeling for computer technology. It's real easy to kill a morning trying to resolve a simple problem.

I'm having problems with updating the front page of our website this morning. I have an application that runs on my laptop, which is where I make the changes, and those changes are then uploaded to the web server that sends them out whenever anyone requests. It's that upload that I'm having trouble with... I can't get the web server to recognize my login. So, until I resolve this, you may be looking at Tuesday's front page for a while.

Every summer Wisconsin roads are filled with cars with Illinois plates driving to and from their cabins or vacation spots here in God's Country. All these people are good for the economy and we really don't mind sharing our state with others. But there are times when it takes a toll. Besides all the congestion, we often have to deal with incidents like this one, reported in yesterday's Beaver Dam Daily Citizen:
Randolph Police Beat: Assist motorist — An officer was paged at 12:15 p.m. on July 5 to help people locked in a vehicle on Stark Street. The officer found a brown SUV with Illinois plates that had a dead battery. The occupants of the vehicle said they could not get out, as the power locks were not working and they were concerned because it was getting hot inside the vehicle. The officer showed them how to manually unlock the door so they could get out.I'm not creative enough to make this stuff up. If you still think I'm pul…
Read more

Are you as happy as I am that the "digital transition" has occurred? That's right, it's over, done, fini... it's a wrap as of about a month ago. TV stations all around the USA have stopped broadcasting in fuzzy but far reaching analog signals. Instead, their new digital signals are more efficient -- able to carry more programming on less bandwidth with less power. The results are a perfectly clear picture -- as long as you can get the signal.

Anyone that was sleeping through all those months and months of warnings and tests about this historic change is now staring at static and noise instead of a clear picture and digital sound. It occurred to me that perhaps the real value of static and noise is about the same as most of the pabulum generated by industry execs selling the viewing public on shock and awe programming in order to make a few more bucks. Much of what I've seen on the 150 channels of clear digital programming o…
Read more

What a difference a week makes. Just a week ago we had a record heat wave... the longest and hottest period in four years. This morning I woke to 51f degrees. Inside the bus-house it was 61f... low enough that Dar was silently plotting a way to turn on the furnace without my knowledge. "Com'on, once the sun rises it'll warm up faster than a frat boy at a Megan Fox film festival."

Besides a bit of chill, there was something else in this morning's air... skunk. First I smelled it. Then, peering out the window, I saw it. Some unlucky polecat was rundown on the road right in front of the farm... and the morning's brisk wind was carrying the redolence directly at the bus-house. Man-O-Man! It looks like I'll have to peel that black and white fur pizza off the road and give it a proper burial. Living in an RV ain't all romance and recreation.