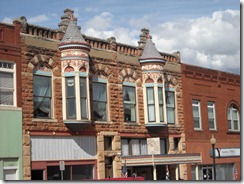 We gave things a chance to settle down a bit after the thunderstorms of yesterday morning before driving into Guthrie and exploring around town a bit. Guthrie is significant because of its unique and outstanding collection of late-19th and early-20th century commercial architecture. (Click on any photo to enlarge)

It all started with the land run of 1889, a method used by the government to distribute land that had previously belonged to American Indians. From wikipedia… 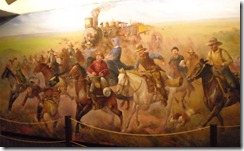 At noon on April 22, 1889, cannons resounded at a 2-million acre (8,000 km²) section of Indian Territory, launching president Benjamin Harrison's "Hoss Race" or Land Run of 1889. During the next six hours, about 10,000 people settled in what became the capital of the new Territory of Oklahoma: Guthrie. Within months, Guthrie became a modern brick and stone "Queen of the Prairie" with municipal water, electricity, a mass transit system, and underground parking garages for horses and carriages. Hobart Johnstone Whitley, also known as HJ and the Father of Hollywood, built the first brick block building in the territory for the National Loan & Trust Company. He was asked by the local people to be the first Governor of Oklahoma. Whitley traveled to Washington, D.C. where he persuaded the U.S. Congress to allow Guthrie to be the new capital of the state of Oklahoma. By 1907, when Guthrie became the capital, it looked like a well established Eastern city.

But politics and circumstances conspired to strip Guthrie of it’s State Capital-ship just three years later. The more populous settlement of Oklahoma City, 30 miles to the south, had the votes to force the change and the Capital was moved there in 1910.

Stripped of it’s economic base, Guthrie slipped into a 70 year long period of stagnation. But one happy result of Guthrie's misfortune is that the city is now a perfectly preserved Victorian enclave. While growth and poor urban planning caused other Oklahoma towns such as Oklahoma City to destroy much of their early downtown architecture, most of the entire central business and residential district of Guthrie is totally intact. 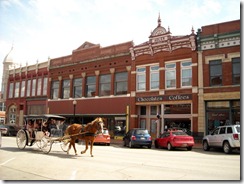 Today Guthrie has a population of about 10,000 people and is considered a northern suburb of the Oklahoma City Metroplex. Walking around the downtown it becomes clear that, while the buildings themselves are marvelous, the underlying economic conditions of the downtown area are not. Vacant stores and for-sale buildings sit sadly… remembering the “hey-days” of more than 100 years ago. 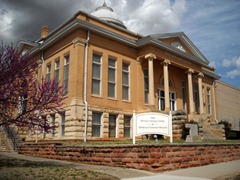 We spent a couple hours in the Oklahoma Territorial Museum which is loaded with artifacts and stories of the ‘89 land run and the process of becoming a State. Adjoining the Museum is the old Carnegie Library built in 1902 and paid for by a grant from Andrew Carnegie. 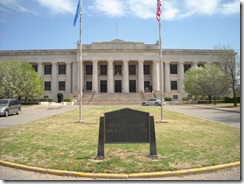 We also explored the grounds of a huge Scottish Rite Masonic Temple, one of the largest in the world. Built in 1925 it’s unclear to me why, in the years after Guthrie lost the Capital and it’s economic base, the Masons would build such a large and grand structure. Before I knew what it was I assumed it was the first Capitol of Oklahoma… it looks like a Capitol. But there never was a Capitol building in Guthrie. The functions of State Government took place in various meeting halls and miscellaneous buildings around town. Even after some time researching the subject online I’ve found very little explaining that impressive Masonic Temple.

Just imagine the frenetic activity of those early days of Guthrie… all the construction of buildings, houses, roads, infrastructure, and all the support and service businesses needed to make it all happen, and all the people working to make it shine. And in an instant the purpose for it all vanished.

On one level, Guthrie feels like it’s getting along alright – tourism catering to history-buffs and those looking for quaint old towns for quiet weekend getaways… bed and breakfasts… stately old Victorian houses… streets still paved with brick. Sadly, it even has a Super Walmart on the edge of town.

But on another level, Guthrie feels like a populated, well-preserved, ghost-town. The stories those old buildings could tell…