In 1907 Oklahoma was the 46th State to be admitted to the Union. Only New Mexico (1912), Arizona (1912), Alaska (1959), and Hawaii (1959) were later. It seems the Oklahoma Territory was being used as a dumping ground for American Indians as they were "removed" from their native areas around the USA, and there was little interest in Statehood for a primarily Indian Territory. Eventually though, enough white settlers moved in, outnumbered the Indians, and progress toward Statehood began in earnest during the 1890's and 1900's.

Originally, the Capitol was in Guthrie, now a suburb of Oklahoma City and where we're currently camped. That building still exists and will be the topic of another exploration in the next few days. But in the middle of one night in 1910 the State Seal was secretly moved from Guthrie to OKC, making it the Capital, where it remains to this day. 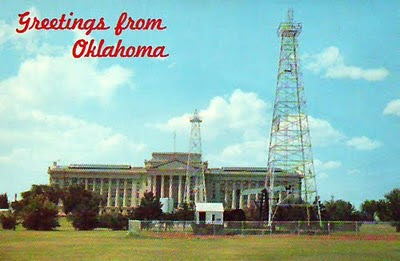 The current Capitol is an impressive structure built between 1914 and 1917. It's very much in the, what I might call, traditional style of stately and ornate Capitol buildings of many other States. The exterior is limestone and pink granite. The six story structure is large, containing 650 rooms and 11 acres of floor space. As construction neared completion in 1917 the decision was made, due to lack of available funds, to not build the dome... and for over 80 years it was one of only a handful of dome-less State Capitols in the USA. That changed, however, in 2002, when the State strong-armed a number of large corporations (Halliburton, General Motors, Conoco, etc) and wealthy families (Express Personnel -- Bob and Nedra Funk??, The Stipe Family (currently under a cloud suspicion for alleged wrong-doing), etc) for the $20 Million to finally build the dome and finish the building. The quid pro quo for those donations was to have their names prominently and boldly encircle the interior dome base for all to see forevermore. 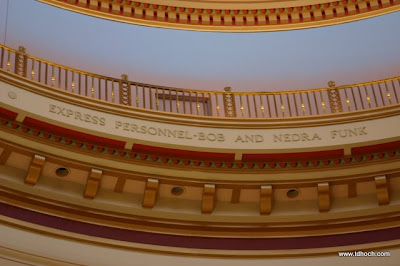 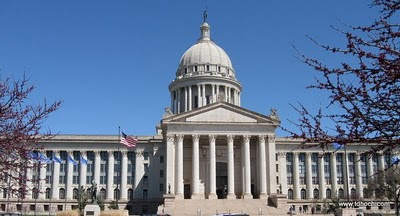 Also unique are the oil wells that dot the Capitol grounds. I don't think any of them are producing anything anymore, but the drilling towers are still there as monuments to the oil industry and the importance of petroleum to the history and economy of the State.

During a tour we encountered a large glass case that contained the Constitution of the State of Oklahoma. Interestingly, it's the largest, longest governing document of any government in the world at over 100 handwritten pages. Compare that to the original 4 page Constitution of the United States. Apparently the designers felt the document should be a codification of laws instead of a set of guiding principles -- to such minutiae as specifying that the flash point of kerosene used for lighting purposes should be 115 degrees! Teddy Roosevelt, President at the time, was not impressed with the document and was quoted as saying his opinion of the Oklahoma Constitution was not fit to print. Changes to a constitution are much more difficult than changes to legislated laws -- and that's part of the reason so little changes in Oklahoma.

In the last 20 years the building has been renovated, updated, and brought back to it's original grand state. Originally, there was very little art and symbolism inside the building. That too has changed the past few years... to the point where I don't think they'd want to add much more. 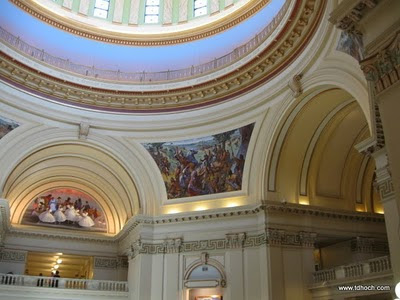 Overall, our visit was an enjoyable one. It's truly an impressive building and does it's job of  imparting the power of the people, the reverence for the rule of law, and the struggles and effort to make it all possible. The tour-guide was knowledgeable and full of background stories, and even made an unflattering comment about a State Senator we encountered -- which drew a chuckle from the group.  Both houses of the Legislature are in session this time of year and the building was a bee-hive of activity.

I think this is our 13th State Capitol that we've explored and, in our opinion, it ranks up there in the top half.