One of the downsides, for people like me, of traveling northbound through the mid-section of the country during the Spring is pollen. Everything is in bloom... trees, bushes, grasses, wildflowers, weeds... and it all looks so beautiful through my itchy, watery eyes. I take in as much of the splendid colors as I can between sneezes. By moving north, we're at the bloomin' edge of Spring during the entire trip so there's really no chance to escape it all. But that's OK... I deal with it... it is a nice time of the year otherwise.

Yesterday Dar and I explored the area around Melvern Lake. The Lake was created by a Corps of Engineers dam finished in 1972. It's primary purpose is to provide flood control on the lower Marais des Cygnes River. It's a small lake by COE standards, maybe 10 miles long by a couple miles wide. But there were no less than 6 different campgrounds developed when the dam was built, the largest of which was given over to the State of Kansas to operate and is known as Eisenhower State Park. We're at Outlet Park campground, the only one on the lower side of the dam. 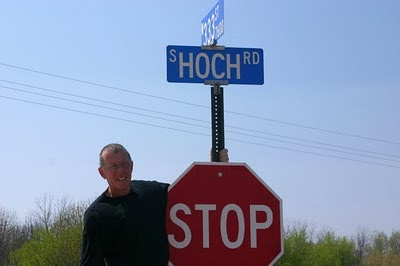 During out explorations yesterday we found a Hoch Road. A little research later found that there was a Governor of Kansas named Hoch in 1905 [http://en.wikipedia.org/wiki/Edward_W._Hoch] so perhaps the road was named for him? Didn't find out much more. But Dar has been heads-down on the computer and digging into family tree research with renewed vigor since we got back. One of these days, I fear, she'll find some sordid and dark branch of the family that my ancestors long ago tried to forget.

The weekend weather looks good. We've decided to make our Capitol run into Topeka on Monday, so we've got all weekend to work on projects around here.