Yesterday, Thursday, was another moving day. Our time at Oologah Lake had come to an end. (As an aside, Will Rogers used to tell everyone he was from Claremore because no one could spell Oologah). I thought getting out of our campsite would be tricky, what with one-way roads, a tight turn, and a few ominous low-hanging tree limbs. I was right. Despite both of our best efforts to keep an eye on everything, the stub of a previously trimmed limb, about an inch in diameter, ended up hard against the side of the bus-house. I had to stop moving, climb up, and cut it off before moving further to avoid even more damage. We're now the owners of a new tree-limb scrape that I'll have to try to polish away -- or at least minimize.

But you know, if you're going to really use these big campers,...if you're going to push the envelope and get them back into those more rustic campsites that we like... you're going to end up with a few brush scrapes. While not happy when it happens, we've come to accept that the bus-house ain't gonna be a polished gem that only stays in antiseptic RV Parks. We're using it. But the next RV will be smaller.

Leaving Oologah northbound, we stayed on US-169 to Nowata where we headed west on US-60 to Bartlesville. There we headed north again on US-75, into Kansas at Caney and through Independence, Buffalo, and Burlington. We found the roads in Kansas, so far, to be far better than Oklahoma roads, which appear little improved since the depression in the 1930's. Many Oklahomans like to boast about their low taxes and the lack of government intrusion in their lives. But low taxes mean less money to spend improving roads, and the roads in Oklahoma, in my experience, are among the worst in the country. If you want low taxes and don't mind living on a dirt road, Oklahoma is the place to be.

Just a few miles north of I-35, as we continued north on US-75, we saw a bunch of RV's parked around a lake that Dar identified as Melvern Lake. We knew there was a Corps of Engineers campground here (there are actually 4 of them on the Lake) but had targeted another Corps park a little closer to Topeka. But this one looked really nice so we threw out the anchor and found our way in... and we're really glad we did. 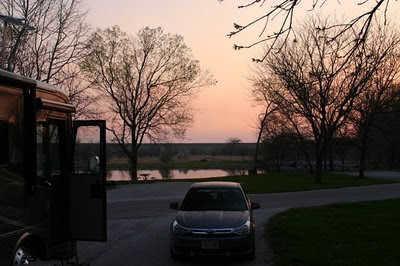 Outlet Park at Melvern Lake is among the best of the COE Parks we've used. The place is clean, well-maintained, and has full hookups at many sites (a rare thing at many COE Parks). The sites are among trees and well separated, and, by my criteria, this is "camping" as opposed to "rv parking". There's evidence that they're actually spending money to improve things further -- the loop we're camped in has 30amp power, but they're running new cable and will soon have 50amp available. The pads are all macadam and level. And the sewer hookup means we can get caught up on laundry again!

We're only 40 miles south of Topeka so the drive in to see the Capitol should be easy. The weather looks good for the next few days so, at this point, we think we'll be here until Tuesday or thereabouts.