Early in March the Mayor of Topeka officially changed the name of the town to Google. [Link to Official City Proclamation]  That's right, for the month of March, Topeka was, in fact, Google, Kansas.

Then, on April 1st, Google changed it's name to Topeka. [Link to Google Blog]  All day that day, we didn't "google" topics for research, we "topeka'd" them. It's all very confusing to an old guy like me who still remembers what an IBM Selectric is and has never heard of a town changing it's name for just a month!

Turns out both name changes were attempts at humor (April Fools!) and self-promotion. But on our way into the Capital City, I wasn't real sure what we'd find.

Regardless of which name was correct, we did eventually find the Capitol of the State of Kansas. Topeka isn't all that large --  a population of about 200,000 including suburbs. Getting around town didn't seem tough at all, but we were there on a Monday and the Legislature is on recess which means all the lobbyists were gone too.

First impressions of the Capitol are favorable. It's dome is taller and more slender than others, but not offensive. The proportions still work. And the rest of the building is designed in the traditional four wing style. Again, no surprise there. The exterior is primarily limestone and exudes massiveness and solidness.

Kansas was made a state in 1861, right at the start off the Civil War. The issue of Kansas being a slave state or a free state prior to Statehood attracted all kinds of wackos, including John Brown and William Quantrill, both of whom left a red stain on the new State during a period called "Bloody Kansas". With so much going on any thought of building a Capitol would have to wait until after the Civil War. 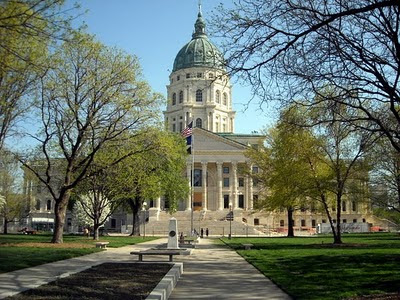 But in 1866, the new Capitol was started. It was built in phases during the next 37 years. Depending on the availability of money (known as "pay-as-you-go") they built, in sequence, the East Wing, then after a few years, the West Wing. For a number of years a drafty wooden covered walkway connected the two separate structures. Eventually the North and South Wings were done, as well as the Rotunda and dome in the early 1900's. Small elevation differences where the floors from one wing adjoined the floors of the next wing are evident, managed with slopping thresholds.

Like other Capitols, this one was neglected and went into decline during the middle 1900's. But in 2002, a multi-year restoration project began with the objective of preserving the building for future generations. Murals and decorative stenciling, that were simply painted over during earlier days were restored to their original grandeur. The entire building was built for $3.2 Million, but the restoration project alone has cost the good citizens of Kansas over $200 Million thus far.

There's a lot of marble, many different kinds from many different places, a lot of copper and brass, and some gold leaf. The amount of art and symbolism is impressive too. Probably the best example of the completed restoration was the Senate Chamber which was just stunning -- among the best we've seen. This picture doesn't do a good job of representing what we actually saw. 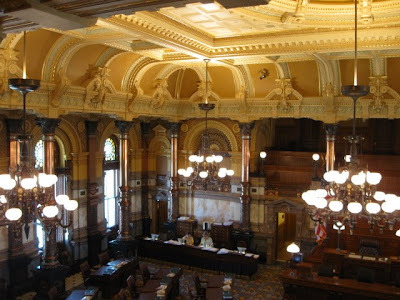 Unfortunately, the restoration project is currently working on the North Wing and the Rotunda, so we could only see the inside of the dome through a small construction peek-a-boo window. 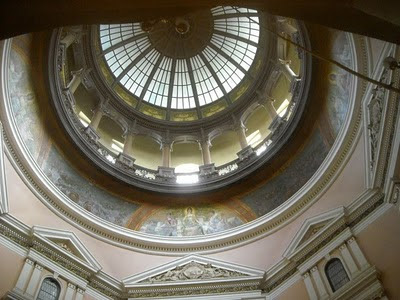 This was the 14th Capitol that we've explored. For me, it ranked up there near the top.

Glad to see you enjoyed Topeka. If you have time, you might want to visit the KU campus in Lawrence. It's beautiful this time of year, and you can stop by Hoch Auditorium, which is named after the ugly former Governor. Safe travels!

P & M... thanks for the comments. Unfortunately we're not going to be able to do Lawrence this time. But, we'll be back :-)