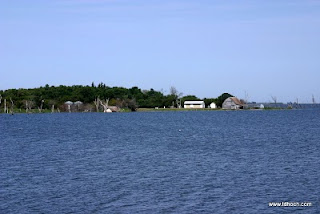 As I wrote in my last post, Devils Lake is in a basin. Water flows in but not out. It's a big tub that catches and holds everything that flows in... rain, snow-melt, minerals, pollution, fertilizer and agricultural runoff... everything. The only process removing water from the lake is evaporation. Because of this situation, during extended dry periods, the level of the lake falls. In fact, during the extended dry period from about 1900 to 1950 when the level of the lake fell by almost 25 feet, there were proposals and projects started to "stabilize" the level of Devils Lake by bringing in water from the Missouri River, about 100 miles to the west. None of these projects were ever completed.

During extended wet periods, the level of the lake rises. From the low in 1950 until 1993, an apparently wetter period, the lake recovered from it's low-water condition, gaining back the 25 feet lost during the dry spell, to about where it was in 1900 when regular measurements began.

But since 1993 the climate has been even wetter and precipitation has increased substantially. Between 1993 and now, the summer of 2010, the lake has risen by more than another 25 feet -- well above anything observed in recorded history. 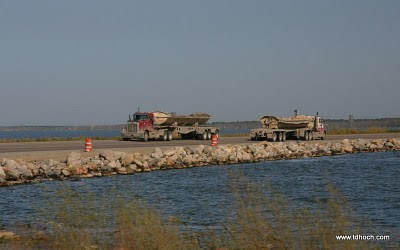 So what's to be done? Well, they continue to raise the levees, and roads, and dams. The roads are full of large trucks -- thousands of them -- hauling levee-building materials around the clock. The State of North Dakota is trying to pump some water from the lake into the nearby Sheyenne River and thence the northward flowing Red River, sparking lawsuits from the State of Minnesota and the Government of Canada, neither of which want the saline and polluted water from the lake. And, I'm sure, there's a lot of praying taking place. 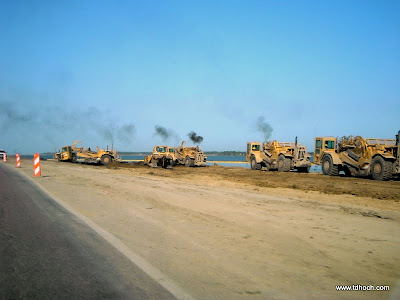 In the end, it will be dependent on the ebb and flow of nature, the climate, and the amount of precipitation that falls during the next few years. If the water keeps rising the City of Devils Lake will become a submerged island behind a series of levees and dams. Once the water rises another 7 or 8 feet from today's levels, it will find a natural outlet into the Sheyenne River and below, despite all political and scientific objections.

I find it interesting that the last two places we've stayed have been so impacted by high water. While we had all heard about the great Grand Forks flooding of 1997, I knew nothing about the Devils Lake problem until the last week or so. I hadn't expected that North Dakota, which I've always understood to be rather dry prairie, would have this situation to deal with. It's really quite an interesting story of the long-term power of nature and short-term vision of humans... of battling nature rather than living in harmony with it.

As always, see our Online Photo Gallery for additional photos of our explorations.