Wading across the Mississippi River

on August 21, 2010
Friday morning we helped our good friends Sue & Jim break camp and load up before they headed for home. We thoroughly enjoyed their visit. Campfires, food, good conversation -- it all made for a fun time. Most of Thursday was spent out exploring Leech Lake in their boat and they topped off the day by making an anniversary dinner for us... a scrumptious feast of walleye fillets with all the trimmings. Thanks Sue & Jim for a wonderful time.

Leech Lake is the third largest lake in Minnesota, about 112,000 acres of water. Back in the early 1800's some thought it was the source of the Mississippi River. But while it's waters do flow into the Mississippi, the actual source has since been determined to be Lake Itasca, some 45 miles or so to the west. Leech has been dammed by the US Army Corps of Engineers and is used as a reservoir today. We're camped near the dam.

After Sue & Jim departed, we drove over to Itasca State Park to check out the headwaters of the Mississippi River. Having to drive around lakes and "almost lakes" (it's been said that Minnesota is the Land of 10,000 Lakes... and another 10,000 "almost lakes" -- large low marshy areas -- which, based on our experience, might be a true statement... at least in this part of the State), it was a 75 mile drive one way. 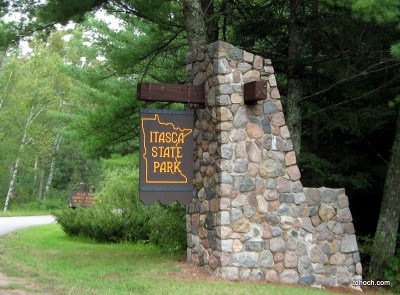 Lake Itasca, as I wrote above, is the source of the Mississippi River. We'd been to the source of the Missouri River near Three Forks, Montana [link] a couple years ago and thought we'd expand on that theme by adding the ol' Miss to the list. The State of Minnesota established Itasca State Park in 1891 -- the first Minnesota State Park, and only the second State Park in the Nation behind New York's Niagara Falls State Park. The objective was to preserve the pristine condition of the headwaters area for future generations. I think they've done a marvelous job. 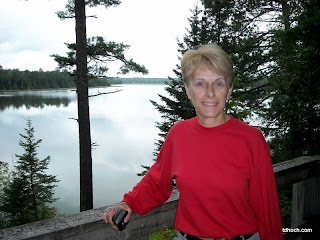 We entered the Park through the East entrance and drove along the length of Lake Itasca to the headwaters pavilion at the north end of the lake. There we found a good set of educational exhibits that cover the early explorations for the source, the history of the native people, and graphical displays of the river from it's source to it's mouth near New Orleans. Just a short walk through the woods we found the headwaters... the spot where water flows from Lake Itasca and becomes the Mississippi River. 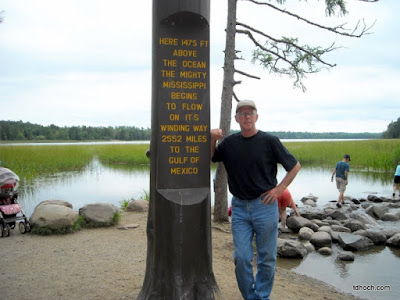 We both had to take off shoes and socks, roll up pant legs, and wade across the River... just to say we did it. I mean, how many people can say they walked across the Mississippi? 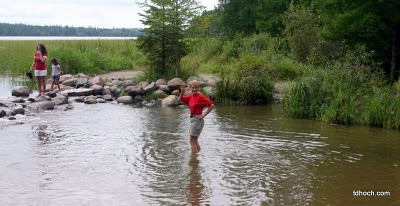 On our way home, following portions of The Great River Road (perhaps another theme for a future exploration??) we rounded a curve in a remote area between Cass Lake and Lake Winnie when I saw a flash of black as something had crossed the road and momentarily disappeared into the ditch. My first thought was "dog", but as I stopped the car we both saw a big ol' black bear come out of the ditch on the other side and run into the woods. Then, with car stopped dead on the road, as I tried to convince Dar to run in after it, it turned around and looked back at us. For a couple seconds he/she was watching us as closely as we were watching it. Dar snapped a picture but it wasn't usable. Nonetheless, a very cool experience.