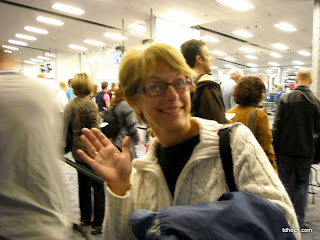 This morning Dar caught a Southwest flight to Wisconsin. She's joining her sister and her Mom for a "girls weekend" and making some preparations for the upcoming holidays.

And that leaves me here in Nevada, alone. Anticipating these solitary periods is better than actually experiencing them. I have plans, a bunch of work to do... but today, after I got back from the airport, I pretty much just veg'd. Maybe a glimpse into the world of the solo explorer?? In any case, having someone to share experiences with is what I've come to enjoy.

The Las Vegas airport was a zoo this morning. They say fewer people are coming to Vegas.. but you'd be hard-pressed to verify that in the "departure" lanes at the terminal. Traffic just crept... stop and go and very slow... the result of cabs and hotel vans just stopping to drop off passengers in any lane they happen to be in. Here, in Vegas, apparently there's no need for courtesy or concern about other travelers. Why should they move over to the curb lane... or even the lane next to the curb lane? They regularly use ANY of the 5 or 6 lanes... simply stopping, opening doors, dropping passengers, passing bags, tipping, and on and on. In any lane.

Have I mentioned lately how much I like big towns... crowds... congestion?

Well, Dar's safely in Wisconsin now... and I think I'll hit the sack.