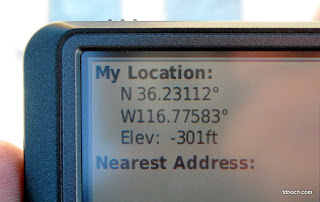 Tuesday, we went over to Death Valley National Park, about an hour drive west from Pahrump. With less daylight for exploring this time of year we made an effort to get started early -- and surprised ourselves when we were actually moving by 9am. The weather was perfect for exploring Death Valley... cool and very sunny. Let me tell you Bunkie... there aren't many cool days in Death Valley.

Death Valley was the name applied to the area by prospectors and miners during the California Gold Rush days during the 1850's. Aligned north-south between two mountain ranges near the California/Nevada border, it's about 70 miles long and 10 to 15 miles wide. The unique geography of the area makes it the lowest, driest, and hottest spot in North America. The average daily high temperature never gets below 65ºf (usually in December) but climbs to 115ºf during the long summer... and long periods of temps over 120ºf are regularly recorded. The hottest day on record is 134ºf which occurred back in 1913. The average annual rainfall is just 1.5 inches and there are a few years on the record with no rainfall at all.

Most of these extreme conditions are due to the valley's geography... a low valley (the entire valley floor is well below sea level) surrounded by high mountains. There are four mountain ranges between the Pacific Ocean and Death Valley which wring almost all moisture from the westerly breezes long before arriving here. The resulting lack of moisture makes for extreme desert conditions -- almost no plants or foliage of any kind -- which means the sun heats the surface of the valley floor quickly and efficiently. The thus heated air rises but is trapped by the surrounding mountains and persistent high pressure (that results from it's extreme low elevation)... and sinks again for another round of heating. This solar heating cycle has been described as a huge natural convection oven. 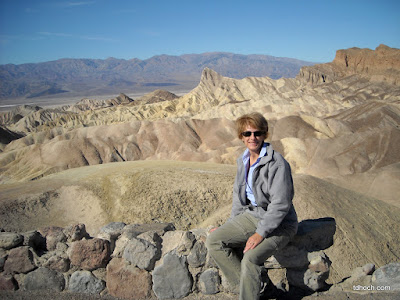 We stopped at Zabriskie Point on our way down into the Park, where we got our first view from a relatively high vantage point. A little further down the road, right at sea level, we stopped to explore the Furnace Creek Inn, a luxury hotel built by the Pacific Borax Company during the roaring 20's. The hotel caters to guests who have 3 or 4 "Franklins" to surrender for each nights stay --  a group we're not part of. A desk clerk (from Wisconsin, no less) told us to look around and then leave by the basement exit... in order to see the Inn's marvelous gardens... a real oasis in the desert. 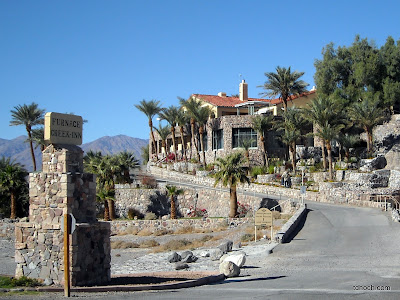 After a stop at the National Park Visitor Center in Furnace Creek... to see the overview film about the Park and to stamp our National Park Passport, we drove a short distance north to the ruins of the Harmony Borax Works. Despite some small finds of gold, silver, and other minerals in the valley during the middle 1800s, the material that produced the most wealth was Borax. Borax is a mineral that is used in a variety of products and processes... from metal-working to cleaning agent to food additive and many more. After it's discovery on the valley floor in 1880, an industry developed that collected and processed the raw mineral into a more concentrated form, and, for 6 short years, was carted out of the Valley to a rail-head in Mojave, CA. by 20 mule team wagon trains. Who of our vintage doesn't remember Ronald Reagan (one of many hosts over the years) and the Death Valley Days radio and TV program sponsored by the 20 Mule Team Brand?

Before actually being here, our mental image of the place did not include the quantity or nearness of the mountains that border the narrow valley. I'm sure those faulty images were formed by the 20 Mule Team Borax advertisements that were set in the desert... what I thought was a nearly endless desert in all directions. But TV isn't reality... despite the urge to make it so.

Death Valley National Park is a big place and there's a lot more to do and see than can be done in one day. So we decided, with only a few hours of daylight left, to explore the area south of Furnace Creek and toward Badwater Basin. We did the two mile hike of Golden Canyon, stopped at Badwater Basin to do the touristy thing at the lowest spot in North America, and did the Artist Palette drive. 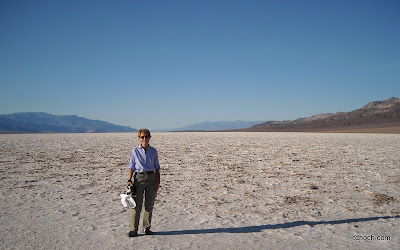 About Badwater... during our stop there we walked about a half mile out onto the salt-flats to get a feel for the size of the basin. The well-trodden path out there is all salt, which later we were scraping off our soles so we wouldn't be tracking it into the car. Interestingly, this lowest point in North America is just 85 miles from the highest point in the lower 48 contiguous United States... a difference of almost 15,000 feet in just 85 miles.

We both found Death Valley to be a fascinating place, one that we'll visit again... maybe even next week after Dar returns from her weekend in Wisconsin. There's a lot more to see and this is the best time of year to be there.

And Dar is trying to process the hundreds of images we shot during the day. I think she'll have them online before she leaves tomorrow morning.

Looking up the difference between a mule and an ass...
T
California Must See National Parks