Gettin' Out While the Gettin's Good 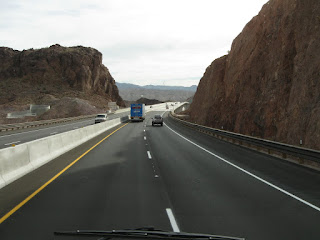 Last night, Thursday night, I checked the weather before climbing in the sack... and saw an already deteriorating forecast deteriorate further. Saturday and Sunday had already been tagged as "No Travel" days by the Safety Director, but now Monday was beginning to look "iffy" too. Much colder weather, snow in the pass between Pahrump and Las Vegas, and high winds... out of the south, of course (the dreaded but all too common headwind). Hmmm. We could hunker down for a few days in Parhump and let it all pass -- or we could just get out of town a little early, on Friday, today... sort of "gettin' out while the gettin's good".

So that's what we decided to do... move today. Dar stowed most of the interior stuff before bed. And this morning we were both up early, before daylight, to attack the pre-move checklist. Today's forecast still called for stiff southerly winds, building during the day... so the earlier we could get going the better. And, in a rare display of organization and motivation, we had all systems ready to go, the toad hooked up, and the wheels turning by 8am. Because we loose an hour when we cross from Nevada into Arizona (yes, back to the Mountain Time Zone again) the early start also gave us some breathing room on the other end, where we really didn't know for sure where we'd be staying.

225 miles later we find ourselves at Cattail Cove State Park, on the banks of Lake Havasu and just south of the booming town of Lake Havasu City in Arizona. We paid for two nights while we check out the area and see what else is around... would consider camping in the area for a week or more, if we found the right spot.

The weather here is a full magnitude better (on the Frobush Scale) compared to Pahrump... especially for the next few days. We're a couple thousand feet lower (500 feet vs. 2600 feet in Pahrump) and couple hundred miles further south... both of which make a big difference to those seeking sun and warmth.

Oh, and Yes, we did take the bus-house over the new bridge at Hoover Dam on our way south today. It was a total non-event, just as our explorations earlier this week predicted. There was a high-wind procedure in place today... where all trucks and high-profile vehicles are advised to use the left hand (innermost) lane when on the bridge. But we made it over without incident... or drama. Aw, Shucks!