On the Shores of Lake Havasu

Hi everyone. We've decided to take advantage of a deal here at Cattail Cove, an Arizona State Park right on the shores of Lake Havasu... pay for 5 nights and get 2 nights free.... and that means we'll be here until next weekend. This certainly fits in the budget and, since it's a holiday week, we're looking for a place to lay low for a few days anyway. The Park is even having a Thanksgiving Dinner to which we're invited, and since we won't be with family for the holiday, this could be the next best thing. 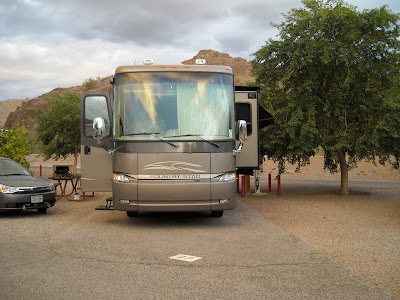 There are no complaints in the weather department from these two explorers. Despite a windy and cool day today, compared to Pahrump we're 20 degrees warmer. And with winter descending on all members of our family in the northern latitudes (daughter Andi called and has snow on the ground in the Portland area), there won't be any grumbling about chilly or breezy Arizona weather from us. 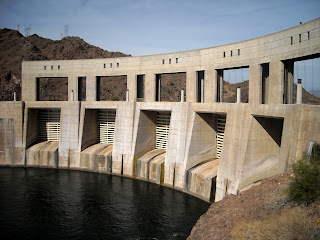 On Saturday we explored parts of the area around Lake Havasu. We especially liked seeing and learning about Parker Dam... the next lower dam on the Colorado River from Hoover Dam. It creates Lake Havasu, which is a major source of life-giving water to Phoenix and Tucson through the Central Arizona Project, as well as for the Metropolitan Water District of Southern California so they can keep their grass green. For the sake of all those people I hope the precipitation picks up markedly in the mountains of Colorado and Utah during the next few winters, and Lake Mead starts filling again. I really don't want to hear about crazy schemes to pipe water from the Great Lakes or Oregon, or to lasso ice bergs in the Arctic and drag them by tug boat to the Port of Long  Beach -- all real proposals at one point or another in the past. I mean... really? Where's the money for that going to come from considering the states of Arizona, Nevada, and California are all broke and technically bankrupt?